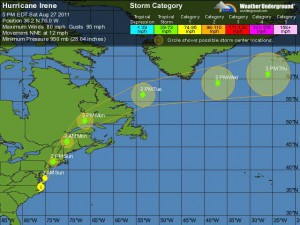 THUNDER BAY – As of 9:00 PM EDT (0100 UTC) the center of Hurricane Irene was located near latitude 36.9 north…longitude 75.6 west. Irene is moving toward the north-northeast near 16 mph (26 km/h) and this motion accompanied by a gradual increase in forward speed is expected during the next day or so. On the forecast track the center of Irene will move near or over the mid-Atlantic coast tonight, and move over southern New England on Sunday.

Irene is forecast to move into eastern Canada Sunday night.

Rainfall amounts of 10 to 14 inches have already occurred over a large portion of eastern North Carolina and extreme southeastern Virginia, with the highest amount of 14.00 inches reported at Bunyan North Carolina thus far.

Maximum sustained winds are near 80 mph (130 km/h) with higher gusts. Irene is forecast to remain a hurricane as it moves near or over the mid-Atlantic coast and approaches New England. The hurricane is forecast to weaken after landfall in New England and become a Post-tropical cyclone Sunday night or early Monday.

A wind gust to 76 mph was recently reported at the Williamsburg-Jamestown Virginia Airport. Tropical storm conditions will gradually spread northward into northern portions of the Delmarva Peninsula and southern New Jersey.

In Canada, Enviroment Canada has issued a tropical storm warning for parts of the Maritime Provinces.

Westjet Airlines advise, “Hurricane Irene may affect travel to Halifax/Moncton/Charlottetown/Sydney/St.John’s/Deer Lake. This may cause the delay or cancellation of WestJet flights to and from these areas. We advise all guests travelling to or from these areas between August 28 – 29 to check the status of their flight prior to leaving for the airport”.

Divers Carve Pumpkins Underwater in Florida’s Key Largo, Risky for Those with Asthma