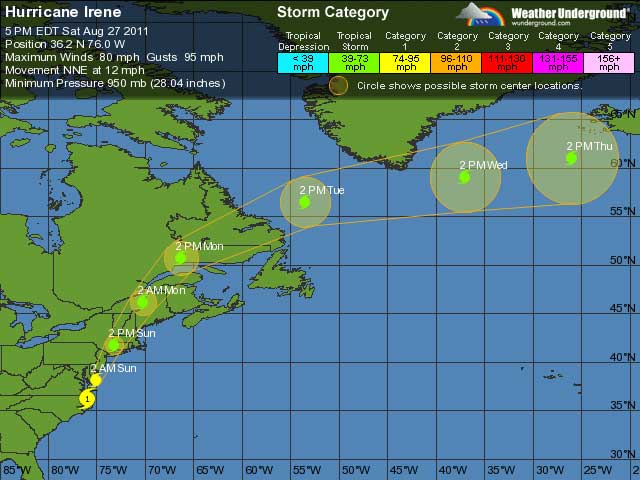 THUNDER BAY – Hurricane Irene has been hammering the eastern seaboard of the United States throughout the day today. After making landfall in Cape Lookout, North Carolina this morning at about 8AM the storm has continued to move northward.

There are three reported deaths as a result of the storm, and over 400,000 people are without power.

Irene is expected to produce rainfall accumulations of 6 to 12 inches, with isolated maximum amounts of 20 inches, from eastern North Carolina northward through the mid-Atlantic states into eastern New York and interior New England.

These rains combined with heavy rains over the past few weeks could cause widespread flooding and life-threatening flash floods as well as significant uprooting of trees due to rain-softened grounds.

The National Hurricane Center, reporting at 5:00 PM EDT (2100 UTC) states “The center of Hurricane Irene was located near latitude 36.2 north…longitude 76.0 west. Irene is moving toward the north-northeast near 13 mph (20 km/h) and this motion accompanied by a faster forward speed is expected during the next day or so. On the forecast track, the center of Irene will move near or over the mid-Atlantic coast tonight and move over southern New England on Sunday.

Irene is forecast to move into eastern Canada Sunday night.

Maximum sustained winds are near 80 mph (130 kmh) with higher gusts. Irene is forecast to remain a hurricane as it moves near or over the mid-Atlantic coast and approaches New England. The hurricane is forecast to weaken after landfall and become a Post-tropical cyclone Sunday night or early Monday.

Irene made landfall in Cape Lookout, North Carolina at 8 a.m. EDT as a Category One Hurricane with maximum sustained winds near 85 mph. The storm surge and rough waves it brought have been severely battering the coast. The GOES-13 satellite saw Hurricane Irene after landfall at 8 a.m. in Cape Lookout, North Carolina on August 25, 2011 at 10:10 a.m. EDT. At that time Irene’s outer bands had already extended into New England.

In an animation created at NASA’s Goddard Space Flight Center in Greenbelt, Md. by the NASA/NOAA GOES Project, GOES-13 satellite imagery taken in 15 minute intervals from August 25 to August 27 at 9:40 a.m. EDT shows Hurricane Irene’s massive reach. The animation shows Hurricane Irene moving through the Bahamas and making landfall at Cape Lookout, North Carolina at around 8 a.m. EDT on Aug. 27.

A Tropical Storm Warning is in effect for: Chesapeake Bay from Drum Point northward and the tidal Potomac; North of Sagamore Beach to Eastport Maine

As well from the United States/Canada border northeastward to Fort Lawrence including Grand Manan and for the South Coast of Nova Scotia from Fort Lawrence to Porters Lake.

Mamakwa calls for emergency response on flooding in the Northwest