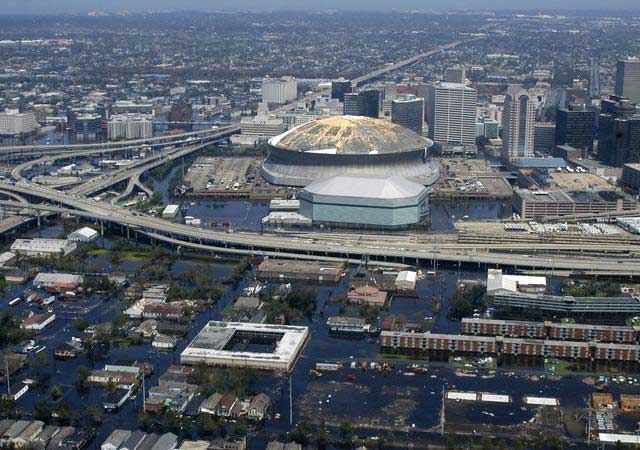 NEW ORLEANS – THUNDER BAY – The power of nature is one that no matter how much man tries to convince ourselves we can overcome, all we are really doing is fooling ourselves. Tornadoes, blizzards, and hurricanes are some of the natural weather events that are clear demonstrations of that power. Six years ago, working on a website focused on American news, the story over the last days of August was Hurricane Katrina.

That deadly storm grew in power as it bore down on the City of New Orleans. The famous city was pounded by the winds of Katrina, and the levees that held back the waters keeping New Orleans dry were broken and almost eighty per cent of the city was flooded. The official death toll, according to the Louisiana Department of Health, was 1,464 people.

Our focus became a missing persons list for the City of New Orleans. Since the growth of the Internet, the evacuation of New Orleans offered the first time that the ‘Net was used to track where people went, and serve as an aid to families and friends to find their missing loved ones.

It was a global effort that finally resulted in the creation of a group called “The Katrina Scrapers” who eventually built a means for the various missing persons databases to be linked together.

The real story however is that, even today, the impact of that terrible storm are still felt in New Orleans.

As the sixth anniversary of Hurricane Katrina approaches, Mayor Mitch Landrieu and FEMA officials have detailed the continued progress on New Orleans’ recovery efforts since the Mayor took office in May 2010.

There are still problems in the City of New Orleans, and the efforts to fully recover from Hurricane Katrina are still ongoing.

Since Landrieu took office, a joint task force made up of officials from the City, Sewerage and Water Board, FEMA, and the Governor’s Office of Homeland Security and Emergency Preparedness (GOHSEP) meet regularly to coordinate and share information and to resolve issues as projects move from planning to construction. The City has met with FEMA officials in 215 meetings and site visits resulting in nearly 250 action items, and the funding for City projects has substantially increased over previous years.

Since August 29, 2005, the City and Sewerage and Water Board have received nearly $1.1 billion in total obligated FEMA funding. The City received about $706.6 million and Sewerage and Water Board received $376.5 million. This funding is reflected in 4,709 total project worksheets (PWs) which describe eligible work, the scope, and cost estimates for repair. Since Mayor Landrieu took office in May 2010, funding for City repairs has significantly surged over the past years—649 PWs have been produced resulting in $170.6 million. This equals more than $11 million per month. Further, 27 percent of funding for the City’s permanent repairs has been obligated in this sixth year.

“When I came into office, the priority was clear. We wanted to get out of the recovery phase and get into the let’s get it done phase,” said Mayor Landrieu. “We wanted to make sure that the City receives everything we’re entitled to but also begin to move beyond haggling and into construction. Our partnership with FEMA has netted significant results for our citizens. We will continue to work together so that our people are made whole and so that we’re creating a smarter, safer, and more prosperous New Orleans.”

In 2010, Mayor Landrieu identified over 100 committed projects that cover a range of facilities and projects from recreation to health clinics to libraries to streets to criminal justice facilities. This year, the projects are moving through the lifecycle more quickly, largely based on the closer collaboration and coordination with FEMA.

“We’ve learned that the key to restoring and rebuilding cities is to work with leaders to identify the projects that are essential to recovery and working out any issues that could derail the progress we want to maintain,” said Tony Russell, Regional Administrator for FEMA. “We don’t always agree on every point, but it is important for us to have an open dialogue and that’s what we’ve achieved with Mayor Landrieu and his team.”

Cedric Grant, the City’s Deputy Mayor for Facilities, Infrastructure and Community Development said, “We realized early on that we needed to have a productive relationship with FEMA and work with them to make sure all eligible damages were identified. After all, the project worksheet is an evolving document and that has been the key in making sure the City has received the maximum amount in obligated funds.”

Interim GOHSEP Director Pat Santos said, “As the 6th anniversary of Hurricane Katrina approaches, the New Orleans area has so much to look forward to as construction and growth continues. And as we’ve done in the past, the state, federal and local officials will work together to make this community more resilient and better than before.”

One key achievement has been a second assessment of neighborhood streets. The first neighborhood to have new funds obligated in this program is the Lower Ninth Ward. As a result of this partnership, Mayor Landrieu and FEMA announced today an increase of nearly $45 million for Lower Ninth Ward street repairs, a major infrastructure improvement targeted for one of the hardest hit neighborhoods in Hurricane Katrina.

During Katrina, roadways throughout New Orleans were inundated with flood waters, resulting in widespread street damages. Additionally, excessive weight from emergency vehicles and construction trucks on the already vulnerable roadways caused further damages. As such, additional eligible damages have been realized.

The total road and sidewalk assessments for neighborhoods impacted by Hurricane Katrina, including the full allotment for the Lower Ninth Ward, have generated $86.6 million in obligated funds from FEMA for the city’s streets.

Landrieu said, “As we talk with residents across the City, one of the main complaints is about the poor condition of our roads. We know that much of the problem was the pressure placed both on the street surface and the sub-surface water lines and utilities by sitting water during Hurricane Katrina. I want our residents to know that we are continuing to work with FEMA to ensure that we get fair assessments. This new funding will not solve all of our street and water problems, but it will go a long way helping resurface streets in our most impacted neighborhoods.”

Additional evidence of the successful City and FEMA partnership has resulted in the following:

Facilities: Pools. The City opened 12 public pools in June across the city. More than $1.8 million of FEMA funding was provided for these recreational facilities.
Youth Study Center. FEMA recently obligated about $8.1 million in additional funding to the YSC raising the total obligated to $24.4 million.
Sewerage and Water Board:

FEMA Trailers. The City and FEMA have coordinated their efforts to reduce and eliminate FEMA trailers in New Orleans. In December 2010, there were 230 trailers still within city limits. Through FEMA casework and assistance and City enforcement of existing ordinances, that number has been reduced to 16 today with additional hearings and removals scheduled.

Photo Details: New Orleans, La. (Aug 31, 2005) – Aerial view from a U.S. Navy helicopter assigned to Helicopter Sea Combat Squadron Two Eight (HSC-28), showing the rising flood waters threatening the entire downtown New Orleans city center, including the famed New Orleans Saints Super Dome. Tens of thousands of displaced citizens sought shelter at the dome, before, during and after Hurricane Katrina, but have been forced to evacuate as flood waters continue to rise throughout the area. HSC-28 flies the MH-60S Seahawk variant, based out of Norfolk, Va., and is embarked aboard the amphibious assault ship USS Bataan (LHD 5) participating in humanitarian assistance operations led by the Federal Emergency Management Agency (FEMA) in conjunction with the Department of Defense. Bataan has been tasked to be the Maritime Disaster Relief Coordinator for the Navy’s role in the relief efforts. U.S. Navy photo by Photographer’s Mate Airman Jeremy L. Grisham

5 Tips on How to Get the Best Hurricane Insurance