Home Anishinaabe “A Pow-Wow is a celebration of life” – Munzeroy

THUNDER BAY – The drum beat is Mother Earth’s heartbeat. Across Northwestern Ontario over the summer, Aboriginal culture comes to life at Pow-Wows. Almost every weekend there will be a Pow-Wow happening in one of the communities across the region. “It is like a get-together, its also a teaching,” said Munzeroy. “It is also a way to keep our culture together. A Pow-Wow is a celebration of life”. Munzeroy is a Ojibwe teen living in Thunder Bay, who participates in Pow-Wows, traditional Native dancing and drumming.

Munzeroy is a very unique young man. He is both quiet, and talkative, and yet also driven. His passion for dance is as much a part of his life as is his smile.

“The songs in which the drummers sing carrys teachings of our ancestors. Each and every song carries a story foretold by our fore grandfathers, the seven grandfathers,” he shares. “The dancing is my favourite part,” he adds. Munzeroy’s mother Mona states, “Dancing is only one part of what the native culture is but there is far more, but for Munzeroy, he truely enjoys the dancing, he is not only dancing for himself but those of his people and their traditions”. 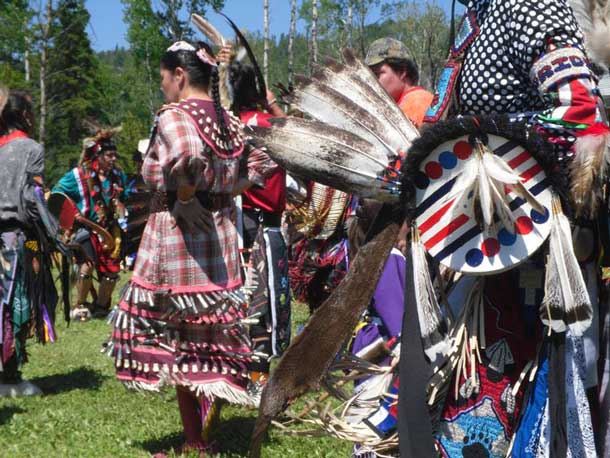 Working with his mother, Mona, Munzeroy has created his own decorative regalia for Pow-Wow dancing. “It’s how other dancer’s recognize which tribe each dancer comes from, and from which clan, the colours are all within the design,” shares Mona.

Mona is teaching her son traditional ways of the Ojibwe people, so he can fully understand and appreciate his culture and heritage. Munzeroy attended his first Pow-Wow when he was only two days old, and has been going to them ever since. She is a careful mother, working to make sure that as her young man grows up he understands both the importance of his roots, but also the importance of the choices he makes.

Last weekend, Munzeroy was dancing at the Helen Lake Pow-Wow. Part of the fun is meeting new people. Part for this young man is learning more about his culture and traditions. Each Pow-Wow has a Grand Entry, where all the dancers enter. Music for Pow-Wow dance competitions and the other activities are provided by Drummers, a group of performers who play a large, specially designed drum and sing traditional songs.

The number of members of a drum group are usually at least four people, and can be far more. Some members of the drum group may wear traditional regalia and dance as well as drum, other times drummers simply wear street clothing. Drums usually rotate the duty of providing songs for the dancers, each taking a turn at the direction of the Pow-Wow.

This coming weekend, if you want to experience Aboriginal culture as growing numbers of First Nations peoples are, you could head out to Lac Des Mille Lac. The community of Nexaadiikaang are presenting “Return to our lands” their fourth annual traditional Pow-Wow.

The Pow-Wow is a way for people to celebrate their heritage. Getting back to the land and the traditional ways.

Food is another important part of a Pow-Wow. “It’s all Indian style,” stated Munzeroy. “There is usually bannock, Indian Tacos, Bannock Burgers. There are also a lot of more modern food too, hamburgers, french fries and pop.”

The Pow-Wow offers a chance for young and old alike to get together and learn from each other.

Here is the music of the Northern Cree Grass Dance.

Footprints: A Walk Through Generations Exhibit to Open