THUNDER BAY – The Institute of Italian Studies at Lakehead University is hosting a book launch on July 3rd 2013. The event generated a great deal of excitement as well in Lamezia in Italy, were at 02:00(GMT+1) where a fairly large number of people gathered in the community to watch the live stream.

The author, Pasqualino Bongiovanni was born in 1971 in Lamezia Terme (Italy), a Calabrian city at the heart of the Mediterranean Sea, between the blue of the Sant’Eufemia Gulf and the green of the surrounding mountains.

Since he was a young boy he approached music and literature, devoting himself to the study of guitar with great passion and living the appeal of poetry.

He got the diploma in classical guitar at the Conservatorio “U. Giordano” in Foggia and got a degree in Humanities at the University “La Sapienza” in Rome. He teaches Italian and classical guitar. As a musicologist, he took part in many conferences and wrote articles for some important reviews (La Gazzetta della Musica, Chitarre, Guitart).

He collaborated with the Istituto dell’Enciclopedia Italiana founded by G. Treccani to the editing of the Dizionario Biografico Degli Italiani. As a poet he published his first work, “A sud delle cose”, in Rome in 2006; a collection of poems which boasts a note of introduction written by Mario Rigoni Stern (1921-2008), one of the most important Italian writers.

Bongiovanni’s works got many awards inItaly and they have been compared with those of the greatest Italian poets of the  century, socially engaged (Salvatore Quasimodo, Rocco Scotellaro, Leonardo Sinisgalli, Franco Costabile), who sang the South of Italy, with its contradictions and social injustices.

Several critics have underlined that Bongiovanni is able to express an undoubted poetical originality, showing clearly that he masters a feeling and a voice which are intimately and socially his own. This is possible thanks to his neat and clear style, furthermore, his poems acquire an elevated dignity because anger and passion are always declined in the right rhythm.

Bongiovanni’s poetry reaches a wider universal breath, which enables him to cross over his own cultural background. 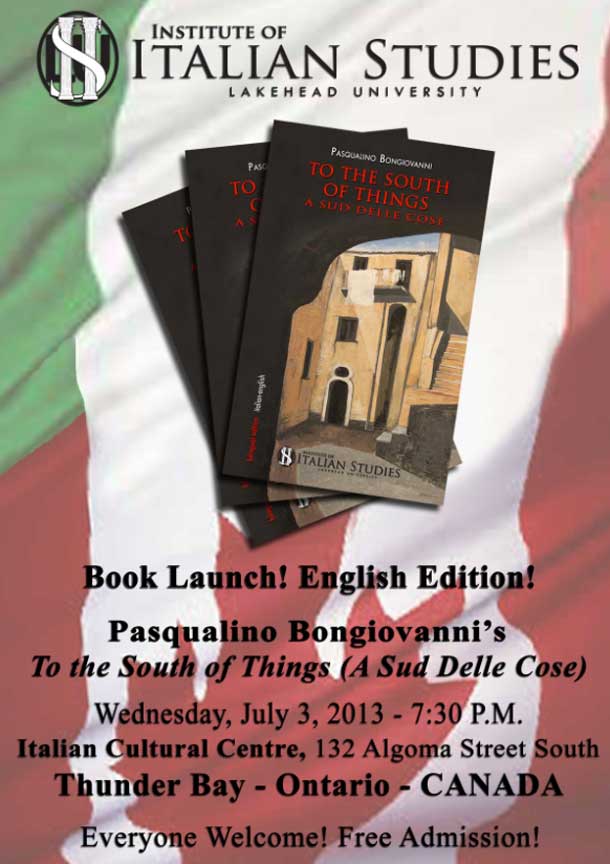 For more information on the book please visit www.pasqualinobongiovanni.it