REGINA – On Monday, January 20, 2020, the Regina Police Service arrested seven individuals as the result of enforcement action at one picket line outside the Co-op Refinery Complex.

One of those arrested was Unifor National President Jerry Dias. Dias has been an outspoken speaker for Unifor Members.

Unifor announced an escalation of job action and turned the tables on Federated Co-operatives Ltd. (FCL) by effectively shutting down the refinery as hundreds of union activists surrounded the 544-acre facility.

“Co-op executives locked our members out six weeks ago and today we are locking them out. No fuel will be leaving this refinery,” said Jerry Dias, Unifor National President at a rally in Regina. “This tremendous display of solidarity is sending a message to this greedy multi-billion dollar conglomerate to get back to the table and bargain a fair deal.”

“We are so grateful to all the members who dropped everything to come and help us fight to protect our pensions,” said Kevin Bittman, Unifor Local 594 President. “This kind of solidarity is truly inspirational.”

“Until FCL returns to the bargaining table with a fair offer for our highly skilled refinery workers, we’re not going anywhere,” added Dias.

For the past 46 days, FCL has relied on the use of scabs and management to run the refinery.

Regina Police statement: From the beginning of this labour dispute, the Regina Police Service has defined its role as keeping the peace and ensuring public safety. The law upholds the rights of the union to lawful protest; likewise, the law recognizes the company’s right to conduct business. On Monday, January 20, 2020, police learned that Unifor members had completely blocked the entrances/exits to the Co-op Refinery Complex, not allowing vehicles to enter or exit the property, in spite of a recent court order which sets out the rules of engagement for both sides in the dispute. Regina Police Service members attended to Gate 7 at the Refinery, the afternoon of January 20th.

Picketing members of Unifor were notified, once again, of the court order preventing them from blocking ingress or egress. Unifor members who are not members of Local 594, were informed that they may be subject to arrest on criminal matters if they chose to ignore the court order or interfere with the lawful operation of the business. Starting at approximately 5:15 p.m., Regina Police Service members arrested seven adult males and transported them to the Regina Police Service detention area. 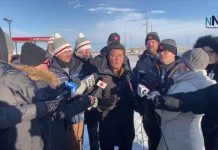