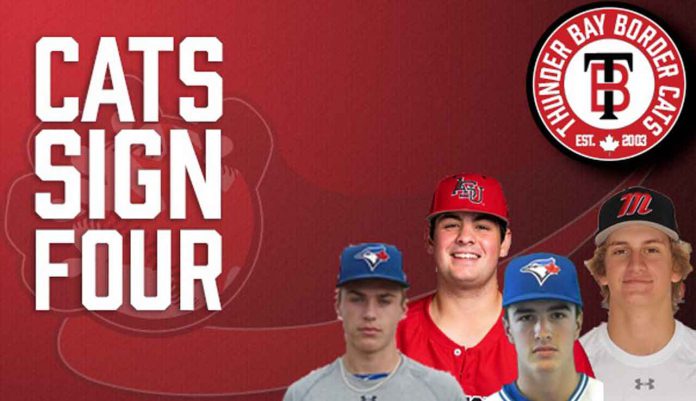 Elkins is entering his sophomore season at Louisiana’s Northwestern State University, where he batted .284 in 52 games last season with three home runs, 16 doubles and 32 runs batted in.   The 5’10”, 190-pound right-handed hitter is a native of Lafayette, LA.

Rowland is a freshman at Arkansas State University and hails from Owasso, OK.  The 6’3”, the 185-pound backstop will also provide offensive flexibility behind the plate as he is a switch hitter.

Jansen, who is from Oakville, Ont., is a junior at Florida’s St. Leo University.  The 5’10”, 190 pound second baseman previously played in the Big Ten at Purdue University and is a left-handed batter.  Jansen is a graduate of the Ontario Blue Jays baseball program where he played under current Border Cats manager Mike Steed.

Barry is from Mississauga, Ont, and is a freshman at Saint Louis University.  The 6’1”, 185-pound right-hander also played in the Ontario Blue Jays program.

The Border Cats open the 2020 regular season at Port Arthur Stadium on Tuesday, May 26, at 7:05 pm against the Eau Claire Express.  Season ticket packages are now on sale at www.bordercatsbaseball.com.