THUNDER BAY – The Canadian Rangers have been called on for Search and Rescue out on the land, as well as assisting communities during wildfire evacuations, and were called into other situations over the past several years to assist communities in crisis.

These members of the Canadian Army Reserve continue to see their role evolve to assist in the north.

Chief Caroline Keesic and members of Council have declared a State of Emergency as an escalation of drugs fueling the addiction epidemic and a breakdown of the community’s water system has caused widespread crisis in North Spirit Lake First Nation.

“Our community has been devastated by an influx of drugs and breakdowns in vital infrastructure. Our people are suffering, and we are beyond our ability to respond with the necessary supports”, said Chief Caroline Keesic. “We had no choice but to call this State of Emergency as we require an immediate response from the appropriate federal and provincial agencies with resources to support our members suffering from harmful addictions and to help leadership stabilize the community.”

There have been interruptions in essential services such as power and water due to a lack of operational personnel. North Spirit Lake leadership, community workers, NAPS police officers, and nursing staff are operating at maximum capacity. 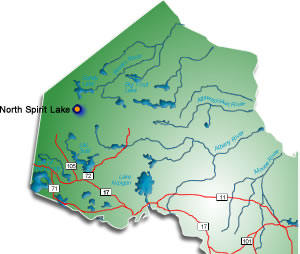 There is no doubt that the crisis situation will worsen without a coordinated effort by all appropriate governmental departments, agencies, and partners to deploy critical resources and relief.

North Spirit Lake is located approximately 170 kilometers northeast Red Lake, Ontario on the southwest shore of North Spirit Lake. It is accessible only by air and seasonal winter roads.

Over recent years, the role of Canadian Rangers in the north has expanded. From helping in fire evacuations, to arriving in host communities to continue to assist the people in their communities during the evacuations.