THUNDER BAY – On Sunday, May 5 at 11:30 am the Royal Canadian Navy (RCN) will honour the service and sacrifice of the thousands of Canadians who fought valiantly in the North Atlantic, including the 128 men who lost their lives with the sinking of HMCS Athabaskan 75 years ago – during the Battle of the Atlantic.

Every year, on the first Sunday in May, members of the Navy family gather in memorial parks to commemorate and honour those who served in the longest battle of World War II. Together, we observe a moment of silence to mark the sacrifice of the more than 4,500 Canadians who lost their lives in the Battle of the Atlantic, in hard-fought victories at sea, or on treacherous convoy duty.

On Sunday, 5 May 2019, starting at 11:30 am, a contingent of sailors from HMCS GRIFFON will be participating in the Battle of the Atlantic Parade at HMCS GRIFFON. We encourage you to join us to remember the sailors who served and sacrificed for our country. 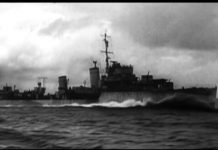 Battle of the Atlantic Remembered at HMCS Griffon