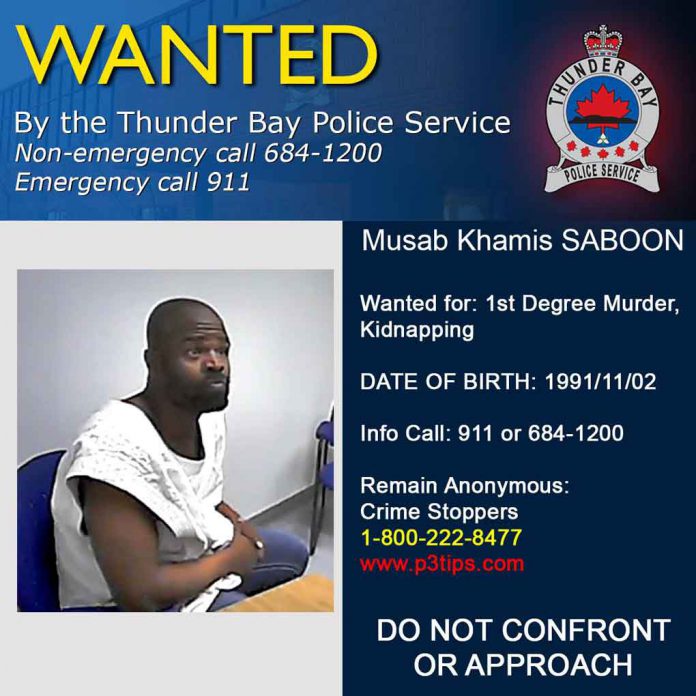 Musab Khamis Saboon Still At Large and Sought by Police

THUNDER BAY – BREAKING – The Thunder Bay Police Service has arrested and charged a second suspect in connection with the homicide investigation of Lee CHIODO.

Marshall HARDY-FOX, 27, of Thunder Bay, turned himself into police in evening hours of Sunday, March 3. He appeared in court this morning and was formally charged with First-Degree Murder and Kidnapping. He has been remanded into custody with a future appearance date.

David HUI, 47, of Thunder Bay was arrested in the evening hours of Saturday, March 2, and was also charged with First-Degree Murder and Kidnapping. He appeared in court over the weekend and was also remanded into custody with a future appearance date.

A Canada-wide warrant has been issued for a third suspect. Musab Khamis SABOON, 27, of Kitchener, Ont., is wanted for First-Degree Murder and Kidnapping. If you have any information that could help police locate SABOON, call 684-1200 or 911.

If you see Mr. SABOON, call 911. Do not confront or approach him.

The investigation into the homicide of Mr. CHIODO continues.

THUNDER BAY – BREAKING – One of the suspects sought by Thunder Bay Police in the kidnapping and murder of has turned themselves in.

Marshall Hardy-Fox has according to informed sources turned himself in and will have a court appearance later today.

If you have any information regarding the whereabouts of Musab Khamis SABOON, 27, Of Kitchener, Ont., please call police at 684-1200 or 911.

Police advise: Do not approach or confront this individual. SABOON is wanted for thje very serious charges of First-Degree Murder and Kidnapping.