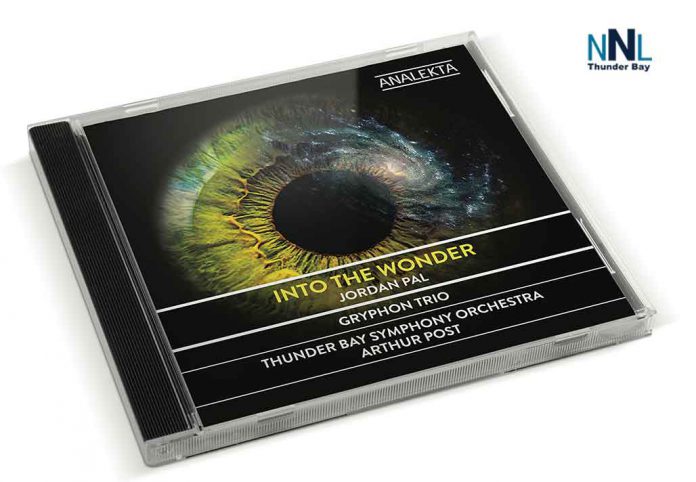 THUNDER BAY – It has just been announced that the Thunder Bay Symphony Orchestra has been nominated for a JUNO Award in the “Classical Album of the Year” category. The nomination is for the “Into the Wonder” album released on November 3, 2017.

The project began in 2012 and took four years to bring to fruition, with its oﬃcial release on November 3, 2018. The music was entirely composed by young Canadian composer, Jordan Pal. The recording features Canada’s celebrated Gryphon Trio playing with the TBSO.

“It’s been an exhilarating experience performing and recording the music of Jordan Pal,” says past Music Director, Arthur Post, describing Pal’s compositions. Mr. Post incubated the project and led the orchestra through the recordings. “From my ﬁrst encounter, I was attracted to his music’s compositional integrity. Here was new music animated by logical and natural progressions, music that embraced traditional tonality, pulse, and expression, while displaying a distinctly 21st-century sonic brilliance.”

Into the Wonder was commissioned my the TBSO under the leadership of its past president, Paul Inksetter. The project was ﬁnanced by a group of local investors and through a grant from the Ontario Arts Council. The album was recorded live at the Thunder Bay Community Auditorium, highly regarded for its ﬁne acoustics, in March 2016. Local producer, Danny Johnson, was tasked with coordinating the production. Carl Talbot and Christopher Johns of Productions Musicom from Laval, Quebec, handled the recording and engineering. The album was published and distributed by Analekta.

Composer, Jordan Pal, says this about the recording: “The solo writing in Starling is demanding, and [the players’] performance is exciting. I’m always amazed at how these brilliant musicians assimilate the music, making it their own…”
TBSO past president, Paul Inksetter, says, “I couldn’t be more proud.”

The CD can be purchased through the TBSO oﬃce by calling 626.TBSO (8276), at any TBSO concert, or by downloading online at analekta.com/en/albums (scroll down).