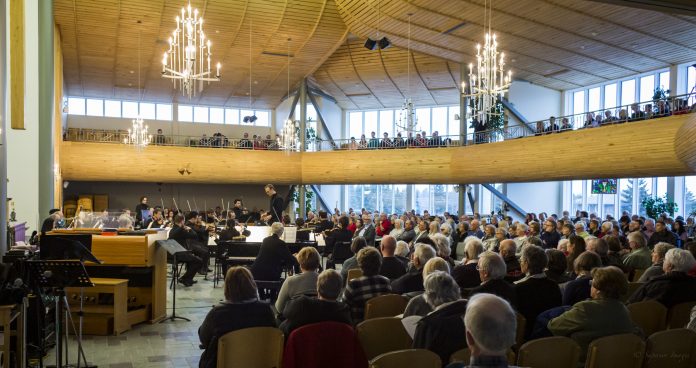 Thunder Bay, ON — Late last week, the TBSO performed the first concert of their 60th Season to a live audience. Both showtimes were sold out, and the room was filled with applause for their return. The TBSO is now thrilled to announce that, with updated provincial guidelines, they can lift capacity limits for the remainder of their scheduled concerts.

The TBSO’s 60th Season and Diamond anniversary is sponsored by TBT Engineering. This will be their fifth season sponsorship bringing their accumulated sponsor total to $100,000. The TBSO is exceedingly grateful for TBT Engineering’s continued support these past six seasons. With their generosity, TBSO has planned an exceptional season ahead.

The season began with two sold-out performances On October 21st and 22nd that welcomed Music Director Paul Haas back to Thunder Bay after a 20-month hiatus. He proclaimed his delight for being able to reunite with the entire orchestra and in-person audience. The good news extends even further now that the TBSO is able to remove capacity limits on the remaining concerts for the season.

With a number of concerts having sold out already, this change couldn’t have come at a better time. It will allow more of TBSO’s patrons to experience the powerful musical talent we have here in Thunder Bay.

To learn more details about upcoming shows and to purchase your tickets, visit tbso.ca.