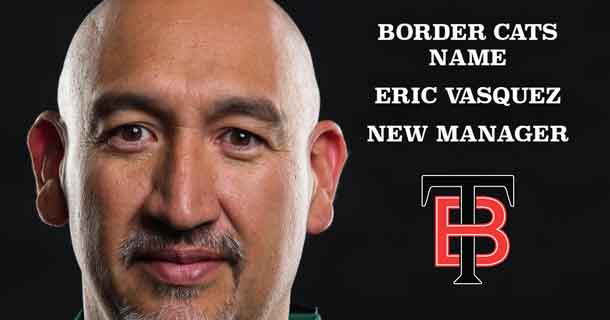 Thunder Bay, ON. – The Thunder Bay Border Cats are pleased to announce that Eric Vasquez has been named the team’s new field manager for the 2019 Northwoods League season.

The 45-year old from Alameda, California, has previous experience in the Northwoods League having served as manager of the Willmar Stingers during the 2017 season.  Under the guidance of Vasquez, the Stingers compiled a record of 41-31 and made the NWL playoffs.

“I am honoured to be named the manager of the Border Cats,” stated the new skipper. “Thunder Bay has a great tradition and I look forward to putting together a staff and team that will enable us to build on that tradition. The Border Cats are going to be a fun team to watch this summer.  As the manager, it is my goal not only to put a quality team on the field but to also represent the city of Thunder Bay across the Northwoods as a premier city and baseball environment,” Vasquez added.

Border Cats Vice President Bryan Graham says Vasquez stood out during the interview process. “Of all the candidates we spoke to, Eric’s experience and veteran leadership along with his previous success in the Northwoods League and his understanding of the grind of the season as well as the tough travel schedule, made him our top choice,” stated Graham.  “Eric is very well connected at the college baseball level across North America and we trust that will translate into a competitive team on the field,” Graham added.