THUNDER BAY –  No new forest fires were found in the Northwest Region by the early evening of Sept. 10.

At the time of this update there were 37 active fires in the region, 33 of which are under observation, two are under control, one is being held and one fire is not under control. Nine fires were declared out on Sept. 10.

Fire hazard in the Northwest Region
The forest fire hazard is predominantly low in the Sioux Lookout, Kenora, Dryden, Red Lake, and Fort Frances districts. Fire hazard conditions in the Thunder Bay and Nipigon Districts range from moderate to high.

Ontario Parks restricts access to some areas of Quetico Provincial Park
An ongoing forest fire in Quetico Provincial Park has necessitated some restrictions for backcountry travelers. Ontario Parks is restricting access to some canoe routes as well as access to a number of lakes. You can find more details here To see a complete list of fires across the province click on our interactive map. You can also get the latest update on the condition of any fire by clicking the fire icon. 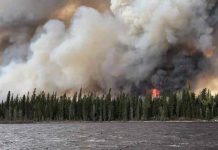