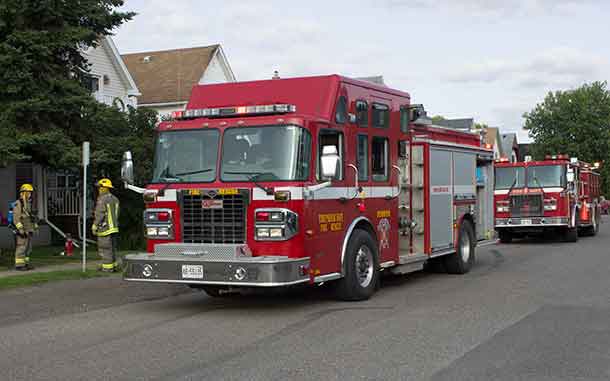 THUNDER BAY – NEWS – Thunder Bay Fire Rescue was kept busy on July 10, 2018 – a pair of calls including a mountain rescue and a structural fire brought out the crews to action.

First, at 2:30 pm on 10 July 2018 Thunder Bay Fire Rescue Service received an alarm for two females in their late teens that were unable to descend from a climb on Mt. McKay.

The two women were stuck on the north face of the mountain where the trail footing is loose shale.

Three pumpers and a technical rescue unit, carrying 14 personnel were dispatched. The crew from Station 6, one of two designated high angle rescue stations, descended down to the climbers from the lookout level.

The women were uninjured.

They were put in harnesses and attached to ropes and assisted down the incline. Station 6 was assisted on the slope by Station 5 crew members, who are from the other high angle rescue station, by assuming care of the climbers at a designated point, bringing them safely to ground level.

No one was injured in this rescue effort.

At 5:00 PM on 10 July 2018, Thunder Bay Fire Rescue Service received an alarm for a structural fire on Oliver Rd. The caller stated their smoker had tipped over and caught the wooden deck on fire. Three pumpers and a water tanker were dispatched. The first arriving crew was met by the deck fire which ignited the vinyl siding.

A second alarm was called which brought another two pumpers and an Aerial Ladder, bringing the total number of firefighters on scene to 21.

The fire extended into the eaves which had to be pulled down to expose the flames.

An attack line was used to knock down the fire. The tanker truck supplied the attack pumper as there are no hydrants in the area. Once the fire outside the structure was extinguished, a crew entered the structure to ensure the fire in the roof was fully out. Ceiling drywall was pulled down to expose the roof.

Damage to the structure is considered medium.

No injuries occurred battling the fire.