KITZBUEHEL – SPORTS – Marcel Hirscher showed the skiing world exactly why he is the man to beat again this season after he pulled off an extraordinary comeback to win the classic Hahnenkamm slalom in Kitzbuehel.

The fearsome Austrian looked to have blown his chance in front of his home fans after a first run that left him way back in seventh place and over a second behind shock leader Dave Ryding of Great Britain.

Ryding produced a superb run down the longer opening course to post a time of 53.42 with German Felix Neureuther and Russian Alexander Khoroshilov excelling too.

Hirscher was even behind compatriot Marco Schwarz with FIS World Cup slalom leader Henrik Kristoffersen crashing out early to dent his hopes of holding off Hirscher as well as another title contender in Italian Manfred Moelgg.

Canadian Erik Read catapulted up the standings into the top 10 early in the second run to post an impressive time that looked hard to beat.

The crowd, though, have seen 11-time FIS World Cup title winner Hirscher produce heroics year in and year out, and they were not to be disappointed again.

The 27-year-old, who also has four world championship gold medals to his name, flew down the shorter second course in a breathtaking time of 50.79 to leave the crowd on their feet and the remaining competitors very nervous indeed.

Neureuther could not match his first run to fall out the podium places, however Khoroshilov managed to pip Leif Kristian Haugen to stay one spot behind Hirscher.

It was left to Ryding to defend his first-run lead but, despite a strong top half, he fell away enough down the bottom half to allow Hirscher in for the win.

Ryding became the first British skier since Konrad Bartelski to finish second in a World Cup race, while Hirscher has boosted his hopes of regaining the slalom title he last won in 2015. 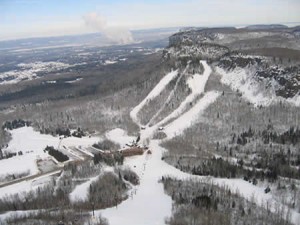 Ski Mount Tremblant – Fly Porter to Get to the Slopes

Thunder Bay Gets out to Enjoy Winter