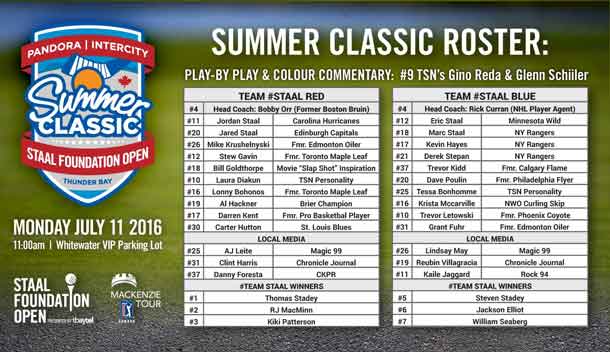 THUNDER BAY – There is something for everyone at the 2016 PGA TOUR Canada Staal Foundation Open presented by Tbaytel. The official opening ceremonies are today, Monday July 11th at the Whitewater Golf Club.

The highlight will likely be the Pandora Intercity Challenge which will see Team Staal Red and Team Staal Blue go head to head in Road Hockey action. Come out and watch NHL players, both past and present face off in the most epic road hockey game of the summer with a host of Celebrity guests including TSN personalities and Mackenzie Tour – PGA TOUR Canada players. The game will be officiated by legendary NHL official, Ray Scapinello and TSN’s own Glenn Schiiler and Gino Reda are set to call the play-by-play action.

The Official Opening Ceremonies promise to be exciting with all the pomp of this Thunder Bay Stellar Summer Event.

Brett is well known as one of the best trick shot golfers in the world and will amaze you with his trick shot show and ability to hit 400 yard drives on the course.

Through the day and through the week there will be lots happening.

The Live Better by Janzen’s Interactive Zone will be the central location for all of the fun activities at the Staal Foundation Open presented by Tbaytel and will be open Monday July 11th & Thursday the 14th – Sunday the 17th. This Interactive Zone will offer activities for the entire family, with a bouncy castle, a dunk tank, obstacle courses, a pitching area, face painting and much more.

Interactive Bus – Canadian Armed Forces: Come aboard the Naval Bus for a virtual tour of the Royal Canadian Naval fleet of patrol frigates, support vessels, destroyers, coastal defence vessels and submarines. You can see what it is like to be a sailor on our interactive terminals with videos on the lifestyle and jobs in the Royal Canadian Navy, a national institution with more than a century of excellence in operations at sea and ashore, both in peace and in conflict.

Bouncy Castle – Boys and Girls Club of Thunder Bay: Bounce the day away on this fun and fantastic inflatable bouncer.

Climbing Wall – Boys and Girls Club Thunder Bay: Climb your way to the top for some great views on this 26′ high outdoor climbing wall.

SNAG Golf “Starting New At Golf” – Staal Foundation Open: Even if you’ve never played Golf before, SNAG Golf equipment offers a fun and easy way to learn the fundamentals of the game. Whether it’s chipping, pitching, putting, or even taking full swings at our Sticky Suit our SNAG Golf zone will be a blast! Whether you’re five years old or 50 years old SNAG teaches everyone how to golf.

Henna Tattoo Station & Costume Photo Booth – Festival of India: Get a traditional Henna Tattoo and then visit the photo booth to get dressed up and have your picture taken in traditional East Indian dresses and apparel.

Staal Foundation Open – Where Everybody Plays