Police report that on February 21, 2016 they received a call from a female who had received a text from her boyfriend that he was gone for a walk on the ice in the harbor.

Police and Fire attended in the area of Fisherman’s Road and began searching for the male. Fire went out in the hovercraft and located footprints leading out and back to shore .

The male was texting his girlfriend during the incident and was eventually located back at his residence.

Police spoke to the male who advised he just wanted to go for a walk and take a picture.

Fire advised while searching for the male there was open water just past the break wall. Police are reminding the public that this area is under the authority of the Harbor Master and permission is required to go out on the ice. 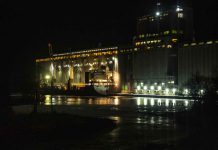