THUNDER BAY – People across Northwestern Ontario have reported getting fraudulent telephone calls from the Canada Revenue Agency. The calls are coming up with an area code 613 on call displays for many people.

The caller, who is not really from the CRA, is trying to scam people into sending them money to pay for tax issues they apparently face.

These scams are just some of the latest frauds that people are trying to put over on innocent people. Using fear and intimidation, along with threats that they will be arrested if they do not comply.

The Canada Revenue Agency states, “Every year, Canadians lose millions of dollars to telephone phishing scams that result in identity and financial theft. Beware of telephone calls claiming to be from the CRA. The CRA never asks for information such as credit card, health card or passport numbers. The CRA never threatens to lay criminal charges or have you put in jail if you don’t pay your taxes”.

If a telephone scammer uses threats to coerce you into providing personal information, ignore the call and report it to the RCMP Anti-Fraud Centre by email at www.antifraudcentre-centreantifraude.ca or by calling 1-888-495-8501.

The CRA will not do the following: 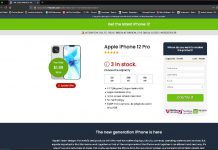 Phishing or Fake Contest Scam? If it sounds too good to be true… it probably is!

Protect Yourself from Fake CRA Calls