Breaking News!July 14, 2020 – Ontario Premier Doug Ford Media Conference
Home Anishinaabe First Nations Leaders Champion “Our Own Inquiry” for Missing and Murdered Indigenous...
THUNDER BAY, ON – Political leaders from First Nations across Ontario have joined together to begin their own inquiry into missing and murdered Indigenous women at a three-day gathering in Thunder Bay this week.

The gathering will bring together 15 First Nations families who have experienced a loss with leaders from First Nations communities and political organizations. Families will have the opportunity to provide advice and feedback on the direction of a First-Nations led inquiry and that feedback will flow up into a national roundtable scheduled for later this month.

“The federal government refuses to acknowledge the need for a national inquiry and we will not sit and wait any more,” said Deputy Grand Chief Denise Stonefish of the Association of Iroquois and Allied Indians who is also the Chair of the Ontario First Nations Women’s Caucus. “We need to look at the systemic issues that have led to the loss of more than 1,100 women and girls. These are not cases of isolated violence.”

The gathering in Thunder Bay will be the first step in the inquiry process and the direction of the families is vital according the Deputy Grand Chief Stonefish. “The input from the families is required if this is to truly be our own inquiry based on our values, our realities and our solutions.”

AIAI is mandated as a Provincial Territorial Organization (PTO) to defend and enhance the Aboriginal and Treaty rights of our seven member First Nations. Our member nations include: Batchewana First Nation, Caldwell First Nation, Delaware Nation, Hiawatha First Nation, Mohawks of the Bay of Quinte, Oneida Nation of the Thames, and the Wahta Mohawks. 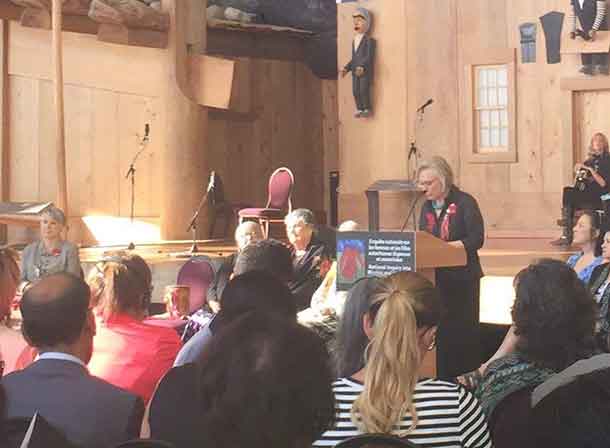 NWAC Outlines How to Engage with MMIW Inquiry