Secretary of State Kerry said on Sunday (September 14) that he is extremely encouraged by pledges of military assistance against Islamic State militants by countries inside and outside the Middle East and that some nations had offered ground troops.

Kerry has been touring the Middle East to try to secure backing for U.S. efforts to build a coalition to fight the Islamic State militants who have grabbed territory in Syria and Iraq.

President Barack Obama is slated to visit U.S. Central Command at MacDill Air Force Base in Tampa, Florida, Sept. 17. Centcom’s area of responsibility includes 20 countries in the Middle East and Central and South Asia, including Iraq and Syria.

At Centcom, the president will receive a briefing from his top commanders, and thank the men and women who will partner with others in the region to carry out the counterterror strategy to degrade and defeat ISIL.

“This is a strategy coming together as the coalition comes together and (as) the countries declare what they’re prepared to do to,” Kerry said in remarks aired on the CBS news program “Face the Nation”. “I want it to be clear, out of this discussion we’re having, that every single aspect of the (U.S.) President’s strategy on what needs to be done in order to accomplish our goal has been offered by one country or multiple countries and all basis are covered,” Kerry said.

British PM Cameron – “We Have to Confront This Menace

British Prime Minister David Cameron said, “We are a peaceful people. We do not seek out confrontation, but we need to understand we cannot ignore this threat to our security and that to our allies. There is no option of keeping our heads down that would make us safe. The problem would merely get worse, as it has done over recent months, not just for us but for Europe and the rest of the world. We cannot just walk on by if we are to keep this country safe. We have to confront this menace.”

“Step by step, we must drive back, dismantle and ultimately destroy Isil [Islamic State] and what it stands for. We will do so in a calm and deliberate way, but with an iron determination. We will not do so on our own, but by working closely with our allies, not just the United States and in Europe, but also in the region because this organisation poses a massive threat to the entire Middle East,” added Prime Minister Cameron. 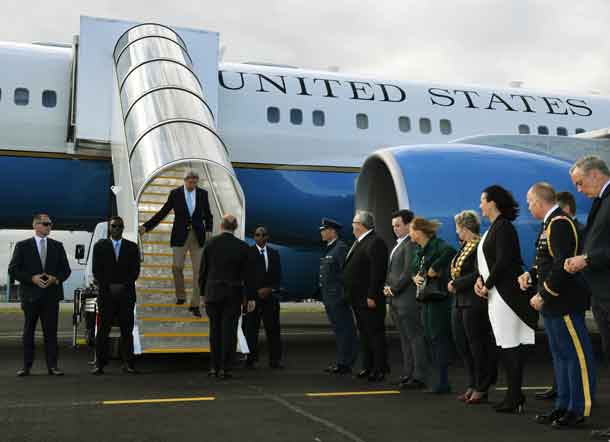 Let “Nobody Lose Their Head” – US Secretary of State Kerry