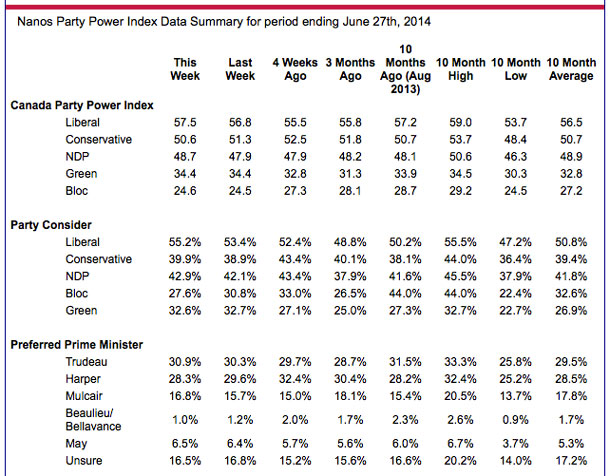 THUNDER BAY – The federal Liberals are riding a ten month high as the political scene shifts into summer mode.

The Nanos weekly federal Party Power Index completed prior to the four federal by-elections had the Liberals with a score of 57.5 points out of 100, followed by the Conservatives at 50.6 points, the NDP at 48.7 points, the Green party at 34.4 points and the BQ at 24.6 points (Quebec only) respectively.

“On the preferred Prime Minister front Trudeau stands at 30.9 percent, Harper at 28.3 percent and Mulcair at 16.8 percent.  Of note, there has been a four week erosion in the proportion of Canadians who think Stephen Harper has the qualities of a good leader (57 percent to 52 percent in the current wave).  Similar questions for both Trudeau and Mulcair have had only minor fluctuations over the same period.  The numbers for Beaulieu (only two data points out of the four week rolling average) in Quebec on the qualities of a good political leaders suggests a possible decline for him although it will take two more waves of tracking to confirm this.

“Readers should note that with 10 months of weekly tracking, Nanos is now calculating highs, lows and averages for the key Nanos tracking variables in the public domain.  This will allow our subscribers and clients to better contextualize the data”.

Liberal Party Says that Conservative Foreign Policy Would Be Reckless