THUNDER BAY – It was a successful start for both of the Thunder Bay Queens’ bantam teams playing in tournaments in Minnesota as the Manshield Construction bantam A and First Class Gas bantam AA sides each came away victorious Friday evening.

At the St. Luke’s Icebreaker Invitational in Duluth the bantam AA squad rode the shutout goaltending of Alyssa Aho as they blanked a team from Chicago by a 5-0 count.

Thunder Bay would get the only goal they would need on the night in the first period as Briana Prete finished off the work of Zoe Hynnes.

The Queens tacked on three more in the middle stanza courtesy of Kaylee Grosjean, Alyssa Cicigoi and Karadyn Kiviaho.

Two more contests are on tap Saturday for the squad as they meet the Prior Lake Lakers at 11:30 a.m. and the Wayzata Trojans at 7:45 p.m.

Nicholl then capped off the scoring in the third with Emilie Varrin picking up the helper.

Meanwhile the Manshield bantam A Queens pulled out a narrow 2-1 victory over the Highland Central Capitals at the Star of the North tourney in Grand Rapids., Minn.

A Delaney McLeod third period power play marker proved to be the deciding goal in that contest.

Katrina Cimini had the other Thunder Bay tally to open the scoring before Highland Central connected on the power play with 4:06 remaining to round out the scoring.

The Queens were outshot 29-14 overall on the night, but pulled out the win thanks in part to the stellar netminding of Samantha Stubbs.

The bantam A side will return to the ice Saturday at 10:50 a.m. vs. either the Eagan Wildcats or Orono Spartans. 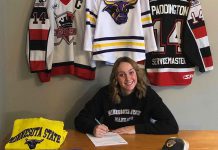 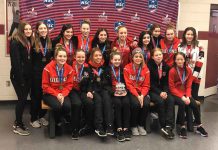 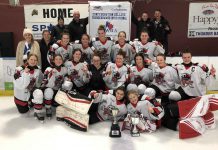