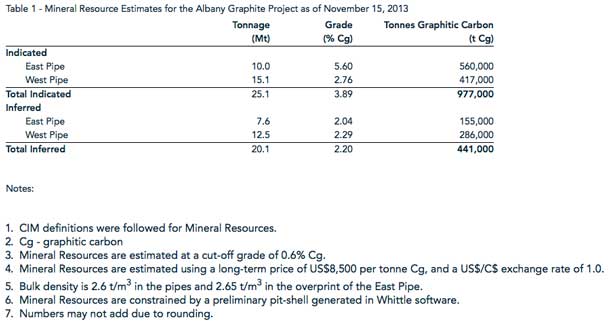 Aubrey Eveleigh, President and CEO stated, “We are extremely pleased with initial results from the independent work completed by RPA displaying a very robust graphite deposit. The Mineral Resource estimate shows a significant amount of graphitic carbon totaling 977,000 tonnes Indicated and an additional amount of 441,000 tonnes Inferred. It’s significant to note that the graphite mineralization extends below the preliminary pit shell and is also open at depth but not included in these Mineral Resource estimates. Zenyatta will continue with market studies and now engage an independent consultant to complete a Preliminary Economic Assessment (“PEA”) by the second quarter of 2014.”