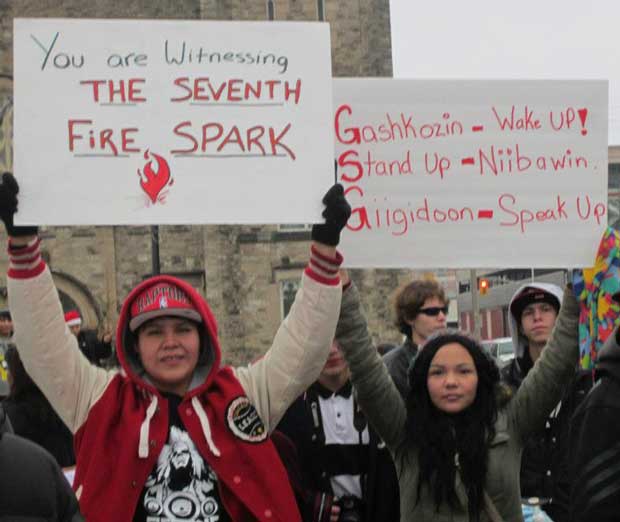 OTTAWA – The Royal Proclamation of 1763 is a document that First Nations across Canada point to as the cornerstone of the relationship between the Crown and the First Peoples. The Royal Proclamation marked a turning point in Canadian history. Issued by King George III, it was the first constitutional act in which the British Crown recognized the rights of First Nations over a vast territory. Although two-and-a-half centuries old, the Proclamation remains a living constitutional document. Enshrined in Canada’s 1982 Constitution Act, it recognizes Aboriginal title and the Crown’s legal duty to consult with Aboriginal Peoples on important matters involving their rights.

Heading into October 7th and Idle No More ramping up action again, the Royal Proclamation, the Constitution, and the actions by the federal and provincial governments along with the Assembly of First Nations and other Aboriginal groups will be increasingly in the news.

Issues including mining and the Ring of Fire in Northwestern Ontario, the move to build oil and natural gas pipelines are going to witness debate, potential legal challenges, and possibly even blockades.

Framing the debate means knowing the history of the issue. This fall, visitors to Canada’s national history museum have a unique opportunity this fall to view two landmark documents that are rarely seen by the public.

The display will feature the historic Royal Proclamation of 1763, a document that forever redefined the relationship between the British Crown and the First Peoples of North America. Produced to commemorate the Proclamation’s 250th anniversary, the display will also feature the Treaty of Peace and Friendship signed by Sir William Johnson and the Huron chiefs of Detroit, one of the first treaties negotiated between the British Crown and the First Nations.

The display will be presented at the Canadian Museum of Civilization from September 19 to October 27, 2013, in collaboration with Aboriginal Affairs and Northern Development Canada and Library and Archives Canada.

“The Royal Proclamation and the Treaty of Peace and Friendship have left their mark on the Canada we know today,” says Mark O’Neill, President and CEO, Canadian Museum of Civilization Corporation. “This presentation offers us a unique opportunity to highlight a pivotal period in Canadian history.”

The Treaty of Peace and Friendship between the British Crown and the Hurons of Detroit was one of several negotiated in 1764, following the Seven Years’ War. These treaties served as a model, followed by governments until the beginning of the 20th century, for the negotiation of territorial concessions by First Nations.

The display also features a historical map from 1755, modified to illustrate the area of the Province of Quebec in 1763 and the “Indian Territories” established by the Royal Proclamation. The province’s size would expand many times; First Nations territory began shrinking in 1764 as land was exchanged for protection and compensation.

Text of the Royal Proclamation:

And We do further declare it to be Our Royal Will and Pleasure, for the present as aforesaid, to reserve under our Sovereignty, Protection, and Dominion, for the use of the said Indians, all the Lands and Territories not included within the Limits of Our said Three new Governments, or within the Limits of the Territory granted to the Hudson’s Bay Company, as also all the Lands and Territories lying to the Westward of the Sources of the Rivers which fall into the Sea from the West and North West as aforesaid.

And We do hereby strictly forbid, on Pain of our Displeasure, all our loving Subjects from making any Purchases or Settlements whatever, or taking Possession of any of the Lands above reserved, without our especial leave and Licence for that Purpose first obtained.

And We do further strictly enjoin and require all Persons whatever who have either wilfully or inadvertently seated themselves upon any Lands within the Countries above described. or upon any other Lands which, not having been ceded to or purchased by Us, are still reserved to the said Indians as aforesaid, forthwith to remove themselves from such Settlements.

And whereas great Frauds and Abuses have been committed in purchasing Lands of the Indians, to the great Prejudice of our Interests. and to the great Dissatisfaction of the said Indians: In order, therefore, to prevent such Irregularities for the future, and to the end that the Indians may be convinced of our Justice and determined Resolution to remove all reasonable Cause of Discontent, We do, with the Advice of our Privy Council strictly enjoin and require, that no private Person do presume to make any purchase from the said Indians of any Lands reserved to the said Indians, within those parts of our Colonies where We have thought proper to allow Settlement: but that, if at any Time any of the Said Indians should be inclined to dispose of the said Lands, the same shall be Purchased only for Us, in our Name, at some public Meeting or Assembly of the said Indians, to be held for that Purpose by the Governor or Commander in Chief of our Colony respectively within which they shall lie: and in case they shall lie within the limits of any Proprietary Government, they shall be purchased only for the Use and in the name of such Proprietaries, conformable to such Directions and Instructions as We or they shall think proper to give for that Purpose: And we do, by the Advice of our Privy Council, declare and enjoin, that the Trade with the said Indians shall be free and open to all our Subjects whatever, provided that every Person who may incline to Trade with the said Indians do take out a Licence for carrying on such Trade from the Governor or Commander in Chief of any of our Colonies respectively where such Person shall reside, and also give Security to observe such Regulations as We shall at any Time think fit, by ourselves or by our Commissaries to be appointed for this Purpose, to direct and appoint for the Benefit of the said Trade:

And we do hereby authorize, enjoin, and require the Governors and Commanders in Chief of all our Colonies respectively, as well those under Our immediate Government as those under the Government and Direction of Proprietaries, to grant such Licences without Fee or Reward, taking especial Care to insert therein a Condition, that such Licence shall be void, and the Security forfeited in case the Person to whom the same is granted shall refuse or neglect to observe such Regulations as We shall think proper to prescribe as aforesaid.

And we do further expressly conjoin and require all Officers whatever, as well Military as those Employed in the Management and Direction of Indian Affairs, within the Territories reserved as aforesaid for the use of the said Indians, to seize and apprehend all Persons whatever, who standing charged with Treason, Misprisions of Treason, Murders, or other Felonies or Misdemeanors, shall fly from Justice and take Refuge in the said Territory, and to send them under a proper guard to the Colony where the Crime was committed, of which they stand accused, in order to take their Trial for the same.

Given at our Court at St. James’s the 7th Day of October 1763, in the Third Year of our Reign.

GOD SAVE THE KING