THUNDER BAY – Is Thunder Bay the Strongest City in Canada? Thunder Bay Strongman Luke Skaarup was in Saskatoon Saskatchewan over the weekend for the Saskatoon Exibition Strongman. The classy strongman shares, “I was able to represent Thunder Bay and Ontario well by taking the win there for a 2nd time. This is a prestigeous competition in Western Canada and in it’s 7th year has been one of the best shows every year in the West.

“In my last trip there in 2011, I was able to win and this year I was aiming to be the first athlete to win this crown twice,” comments Skaarup.

There were 12 athletes from Alberta, Saskatchewan, Manitoba and Ontario competing with top athletes like the 2012 winner Nathan Rolston, Steve Halliday, Travis Krushelnicki, and Chris McDole to name a few. Alberta’s strongest man Ryan Vance had to withdraw due to a quad tear that he suffered while rolling a car in competition the weekend before.

The first event was the Tire Flip, the athletes were paired up two at a time and each proceeded to flip the 840lbs tire for 80ft and 11 flips.

“I was in the fourth heat with Nathan and was happy to go up against him as he is always a solid competitor,” states Skaarup. :We started fast and I had a bit of a lead early, slipped and lost my footing on the 3rd flip, where Nathan started to gain on me. I managed to get my rythym back and finished in just over 50s with Nathan right behind me. This seemed like we had set the top two times until Jason Glowa from Regina flew through the course in 48s…wow”. 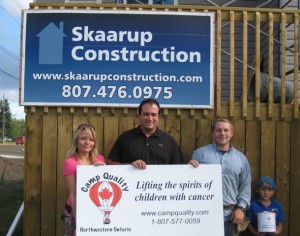 Last week a can of money containing $1833.61 was presented to Camp Quality by Daniel and Kateri Skaarup organizers of the Thunder Bay Strongman event. Our thanks to two of the event sponsors Skaarup Construction and to Vince Mirabelli of Re/Max. Special thanks to our 6 year old photographer Daniel Jr.! [/sws_pullquote_right]

The next event was the Circus Dumbbell press, a giant 12″ diameter dumbbell weighing 155lbs which had to be pressed over head with one hand as many times as possible.

Skaarup says, “I was up last against Jason in the last pairing and we got to see all of the top numbers before we went. Artur Walus (Fort McMurray) had 7 reps and Steve Halliday had 8 reps before we were up. The whistle blew and I crushed out the first nine easily for the win, asked the crowd if they wanted another and did 10 easy reps. Jason managed 7 to tie Artur for 3rd here. Top 3- Luke, Steve, and Jason/Arthur”.

“I was up last and most guys were struggling to reach the end of the course. Tim Sahar had a time just over 50s and Chris McDole (Winnipeg) had a time of 41s for the top times to finish the course before I went. I adjusted the implements to make sure they were ready and was set to go,” shared the strongman.

“The whistle blew, I ran quickly down with the 275s, made a quick transition to the 315’s and finished easily with a time of 30s and another event win”.

“You lift up a car as many times as you can. We were lifting a Toyota Venza which weighed roughly 850lbs in the hands. This weight proved to be too much for many of the competitors with 7 or 8 of the tweleve athletes failing to get a single lift. Steve Halliday did 1, Nathan did 3, and Travis Krushelnicki (Regina) did 5 before I went, so I only needed 6 lifts for the win. I started lifting and it was heavy, likely the second heaviest such event I have ever done. I did 5, paused, did a 6th rep and stopped there. I may have had 2 or 3 more lifts in me but not many more”.

The last event was the atlas stones. The athlete has to lift 6 round stones ranging from 250lbs to 400lbs in a row onto boxes ranging from 60″ to 44″ high. In the 7 year history of this competition with this exact event, only Nathan Rolston had ever managed to load all 6 stones in a row (done in 2012). Many of the athletes managed 3, 4 and 5 stones with Jason Glowa being the first to load all 6 stones on this day.

“I was up with Travis as I had an 11pt lead going into the stones and only needed to do one for the win and they wanted the battle for 2nd place to be last as it was 1pt between Nathan and Steve for 2nd,” stated Skaarup.

“I did the first 5 stones in 23s but then suffered a severe abdominal cramp while lifting the 400lbs stone, I spent thirty seconds straight trying to stretch out and to get my abdominals to release, when they finally unlocked I gave it one attempt at the same time Travis was trying to load the 6th stone, he loaded it but I fell short. Next up in the battle for 2nd place was Nathan and Steve. Nathan flew through the course and did all 6 stones in 45s for the event win with Steve close behind with 5 stones in 40s. Top 3 were: Nathan, Jason, Travis and I managed 4th”.

The top 3 overall were: Luke Skaarup (Thunder Bay), Nathan Rolston (Saskatoon), and Steve Halliday (Regina). There are a few picture of the top 3 on my FB page if you’d like to use them.

This was a well run and fast paced competition. The 5 events in 2 hrs and 15min was great and the crowd was cheering loud and supporting the athletes all day. I was proud to be the first athlete to win this competition twice and to represent Ontario so well in the West. Next up for me will be the Dubreuilville Pro Strongman competition on September 7 and 8.