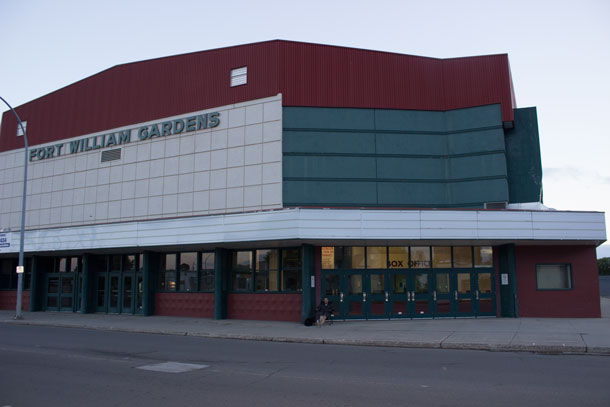 THUNDER BAY – It is Stanley Cup Day in Thunder Bay. Chicago Blackhawk player Patrick Sharp is spending his twenty-four hours with Lord Stanley’s iconic trophy here in Thunder Bay. At 7:00AM, Travis and Judy were the only two people lined up. That has become a bit of a tradition for Travis who was first in line last time too.

Hockey fans can get to the Fort William Gardens and get their picture taken with Patrick Sharp and the Stanley Cup. However lines are expected to be long, and getting there early to line up is a good idea.

Sharp will be at the George Jefferies Children’s Centre this morning for a private function, and then at the Gardens.

The rest of the day will be in private functions across the city.

There is an enormous amount of trivia associated with the Stanley Cup.

The Thunder Bay author of The Hockey Bibliography, Professor Doug Thom, shared that there is one woman’s name on the Cup, a lady who worked in the Colorado franchise office.

Professor Thom also commented that in 2009, the engraver added an extra a to Jordan Staal’s name on the Cup.

That oversight has been fixed.

The Stanley Cup spends a day with each of the members of the organization that wins the cup in the National Hockey League Championship.