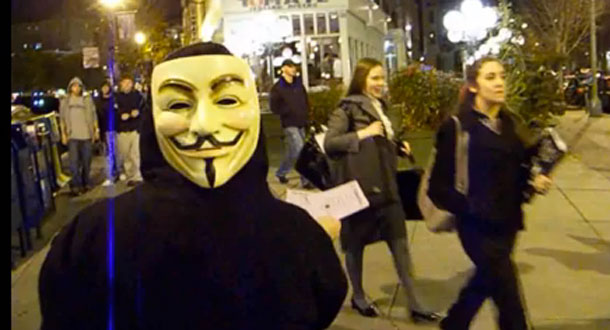 THUNDER BAY – Tech – Anonymous is calling for an Internet blackout. In a video and statement posted online on Youtube, the group is expressing concern over information sharing between Google and Youtube and the United States government.

The group is seeking web developers to go black on Monday April 22nd.

What does this mean?

The Cyber Intelligence Sharing and Protection Act (CISPA) is a proposed law in the United States which would allow for the sharing of Internet traffic information between the U.S. government and technology and manufacturing companies. The stated aim of the bill is to help the U.S government investigate cyber threats and ensure the security of networks against cyberattack. (Source: Wikipedia)

The Electronic Frontier Foundation (EFF) state, “The privacy-invasive bill known as CISPA—the so-called “cybersecurity” bill—was reintroduced in February 2013. Just like last year, the bill has stirred a tremendous amount of grassroots activism because it carves a loophole in all known privacy laws and grants legal immunity for companies to share your private information. EFF has compiled an FAQ detailing how the bill’s major provisions work and how they endanger all Internet users’ privacy”.

Dear citizens of the internet,

The United States Government is again attempting to control and censor the internet. The Cyber Intelligence Sharing and Protection Act has just recently passed the house.

This bill would allow major internet entities such as Facebook, Twitter, and Google to voluntarily share your personal information with the U.S. Government. This will not only effect users in the United States, but also anyone with an account with these companies.

This upcoming Monday, April the 22nd, we invite you to join Anonymous in a internet blackout. We encourage all web developers and website owners to go dark on this date. Display a message as to why you are going dark, and encourage others to do the same.

We hope, just like the successful protest over the Stop Online Piracy Act, we can encourage the senate to stop this bill.

Spread the message, and inform the world.