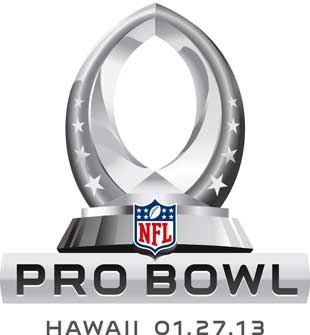 The 2013 Pro Bowl will be played on Sunday, January 27, 2013 at Aloha Stadium in Honolulu, Hawaii one week before Super Bowl XLVII in New Orleans. Broadcast live on NBC at 7:00 PM ET, the Pro Bowl will be held prior to the Super Bowl for the fourth consecutive year and serve as the signature kickoff event of Super Bowl week.

The starting quarterback for the NFC is Green Bay’s AARON RODGERS, his third Pro Bowl berth. Rodgers, named the NFC’s starter for the second consecutive season, leads the NFL with a 106.2 passer rating. He is joined at the position by two-time All-Star MATT RYAN of Atlanta and rookie Griffin of Washington. Ryan has guided the Falcons to a 13-2 record and the No. 1 seed in the NFC playoffs. He has 56 wins, the most all-time by a starting quarterback in his first five NFL seasons. Griffin, second in the NFL with a 104.1 passer rating, is the fifth rookie QB selected to the AFC-NFC Pro Bowl (Dan Marino, Vince Young, Andy Dalton and Cam Newton).

Starting at running back is Minnesota’s ADRIAN PETERSON, who leads the NFL with 1,898 rushing yards. A five-time All-Star, Peterson needs 102 yards to record the seventh 2,000-yard season in league history. He is joined by two-time Pro Bowl selection MARSHAWN LYNCH of Seattle and four-time All-Star FRANK GORE of San Francisco. Lynch, who was last selected with Buffalo for the 2009 Pro Bowl, is second in the NFL with 1,490 rushing yards. Gore has rushed for 1,146 yards, his team-record sixth 1,000-yard season.

Minnesota’s Felton, who has helped pave the way for Peterson, completes the backfield at fullback.

The starting NFC wide receivers are Detroit’s CALVIN JOHNSON and Chicago’s BRANDON MARSHALL. Johnson, named an All-Star for the third consecutive year, has a league record 1,892 receiving yards, breaking Pro Football Hall of Famer Jerry Rice’s 1995 record of 1,848. Marshall, a four-time Pro Bowl selection, was named the game’s Most Valuable Player last season after six catches for 176 yards and a Pro Bowl record four touchdowns. Filling out the position are first-timers Cruz of the Giants and Jones of the Falcons. Cruz has 82 catches for 1,040 yards and nine touchdowns. Jones has registered 76 receptions for 1,142 yards and 10 TDs.

Starting at tight end is Atlanta’s TONY GONZALEZ, his 13th All-Star selection, a record for a tight end. He is the Pro Bowl’s all-time leader in receptions (49) and receiving yards (746). He ranks second in Pro Bowl history with six touchdown catches. Joining Gonzalez at tight end is Dallas’ JASON WITTEN, who has 103 receptions and passed Gonzalez (102 in 2004) for the most by a tight end in a single season in league history. Witten has been selected to eight Pro Bowls.

New Orleans’ JAHRI EVANS and San Francisco’s Iupati are the starters at guard. Evans has earned his fourth consecutive All-Star berth while Iupati makes his first trip. CHRIS SNEE of the New York Giants, a four-time selection, completes the position.

Seattle’s Unger, a Pro Bowl newcomer, will start at center. Green Bay’s JEFF SATURDAY, named to five Pro Bowl squads as a member of the Indianapolis Colts, is the other center for the NFC team.

Chicago’s JULIUS PEPPERS and the New York Giants’ JASON PIERRE-PAUL will get the start at defensive end. Peppers has been chosen to eight Pro Bowls, including each of the past five (three with the Bears). Pierre-Paul was selected to last year’s Pro Bowl but did not play due to the Giants’ participation in Super Bowl XLVI. Minnesota’s JARED ALLEN, a five-time selection, has compiled his sixth consecutive 10-sack season and fills out the position.

The starters on the interior defensive line are San Francisco’s JUSTIN SMITH and Chicago’s Melton. Smith is making his fourth consecutive Pro Bowl appearance while this is the first All-Star selection for Melton. Tampa Bay’s McCoy, another Pro Bowl newcomer, completes the position.

For the fifth consecutive year, San Francisco’s PATRICK WILLIS, a six-time All-Star, has been selected to start at inside linebacker. He will be joined by 49ers teammate Bowman, a first-time choice. Bowman (140) and Willis (116) are the top two tacklers on the NFC’s top-ranked defense (296.5 yards per game).

The starting outside linebackers are San Francisco’s Aldon Smith and Dallas’ DE MARCUS WARE. Smith, who will make his Pro Bowl debut, leads the NFC with a team-record 19.5 sacks, three behind Michael Strahan’s single-season NFL record (22.5 in 2001). Ware has been selected to seven consecutive Pro Bowls and has notched at least 10 sacks in each of the past seven years. The other outside linebacker on the NFC squad is Green Bay’s CLAY MATTHEWS, who has been selected to four Pro Bowls.

Both starting cornerback positions belong to the Bears, who lead the NFL with eight interception-return touchdowns. Chicago’s CHARLES TILLMAN, making his second consecutive appearance, leads the NFL with 10 forced fumbles and ties for the league lead with three interception-return touchdowns. His Bears teammate Jennings, a Pro Bowl newcomer, ranks first in the NFL with a career-high eight interceptions. The last time two cornerbacks from the same team were selected as starters was the 1988 Pro Bowl when Cleveland’s Hanford Dixon and Frank Minnifield were chosen. Rounding out the cornerback position is Arizona’s PATRICK PETERSON, who ties for second in the league with seven interceptions. Peterson, selected as the NFC’s kick returner last year, joins Pro Football Hall of Famer Rod Woodson as the only defensive players to be selected to the Pro Bowl as both a defender and kick returner.

The secondary is completed by 49ers strong safety Whitner and free safeties DASHON GOLDSON of San Francisco and EARL THOMAS of Seattle. Whitner, a Pro Bowl newcomer, and Goldson, who was also selected last year, will get the start. It marks the first time two teammates were selected as the starting safeties since Philadelphia in the 2005 Pro Bowl (Brian Dawkins and Michael Lewis). Thomas is making his second consecutive appearance.

On special teams, Seattle’s LEON WASHINGTON will be the kick returner. Washington, chosen to the 2009 Pro Bowl as a member of the New York Jets, has eight career kick-return touchdowns, tied for the most in NFL history. Washington’s Alexander, a six-year veteran from California, will be the special teamer in his Pro Bowl debut. Minnesota’s Walsh, who has set an NFL single-season record with nine 50+ yard field goals, will handle the kicking duties. New Orleans’ Morstead, a four-year veteran from Southern Methodist, will be the punter.

The 42-man NFC squad is comprised of 21 offensive and 17 defensive players plus four specialists. A 43rd “need” player will be chosen by the NFC head coach and must be a long snapper. The 2013 NFC coaching staff will be from the team with the best regular-season record that is eliminated in the NFC Divisional playoffs.

The NFL is the only professional sports league that combines voting by fans, coaches and players in determining its All-Star teams. The consensus vote of each group counts one-third towards the total. Each team submits two ballots – those of the coach and the players with no one permitted to vote for a player on his own team.

The American Football Conference defeated the National Football Conference 59-41 last season in the Pro Bowl. The 2013 game is the 43rd between the AFC and NFC All-Stars. The all-time series is tied 21-21. Fans can purchase tickets to the 2013 Pro Bowl at www.NFL.com/probowl.