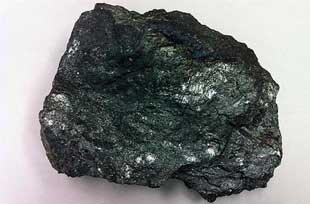 THUNDER BAY –  Mining opportunities are not only in Northwestern Ontario. There are many areas of Canada and places around the world where there are bounties of mineral wealth. Mining exploration in Canada is growing, as new prospects are developed almost weekly.

Great Atlantic has taken a driving seat when it comes to exploring Atlantic Canada. As explained by Christopher Anderson, CEO Great Atlantic, “We are strategically positioned in the number 1 mining region of the world, having assembled an A team of renowned local explorers and pursuing the most sought after metals on the planet, Antimony, Tungsten and Gold.” This three pronged strategy has made GR stand out.

Their focus is reiterated further by Survey of Mining Companies 2011/2012, christening New Brunswick as number one mining region. The bulk of GR’s portfolio is in New Brunswick and then Newfoundland and Nova Scotia.

According to Fred McMahon, Vice President of International Policy Research at the Fraser Institute and Coordinator of the survey, “New Brunswick shot to the top of the rankings as miners lauded the province for its fair, transparent, and efficient legal system and consistency in the enforcement and interpretation of existing environmental regulations. Combining that with a competitive taxation regime and minimal uncertainty around disputed land claims and New Brunswick has emerged as a superstar in the view of the global mining community.”

President and CEO Christopher Anderson, illustrates the region’s enthusiasm with a straightforward vision: “We are the boots and hammers exploring Atlantic Canada.”

THE SEARCH FOR CRITICAL METALS

One point that sets Great Atlantic apart is the company’s determination to search for lesser-known yet critical metals.

Take tungsten: with the highest melting point and the greatest tensile strength of all elements, tungsten is essential in a vast application of products, such as drillbits, armour and bullets. Yet about 85% of Tungsten’s global production is from China, with very little coming from North America even though it’s on American Elements’ 2011 Top 5 US Endangered Elements List.

To capitalize on future demand, Great Atlantic has put considerable effort into tungsten exploration. The company recently acquired the South Quarry Tungsten property, situated 85 kilometres south of Bishops Falls, Newfoundland. The property, which is comprised of 8,900 acres, last saw exploration from 1983 to 1986 when Kidd Creek Mines conducted extensive groundwork. Consisting of similar geology as the renowned Sangdon tungsten mine in Korea, the South Quarry property hosts considerable potential. The property hosts drill-ready targets and favourable past exploration that, when tested in future exploration, could produce big results.

Along a similar theme as tungsten, Great Atlantic has taken considerable steps to discover another critical metal-antimony-which it recently illustrated in its acquisition of the Speerville Antimony project. Consisting of 7,800 acres, the 100% owned Speerville Property lies in western New Brunswick and is adjacent to the company’s MacDougall Road Antimony property. In 2012, field crews located an antimony occurrence on the Woodstock Fault zone, which intersects Golden Ridge’s gold-antimony project and GR’s MacDougal Road property. Crews have extended the zone for one kilometer and geochemical assays are pending. 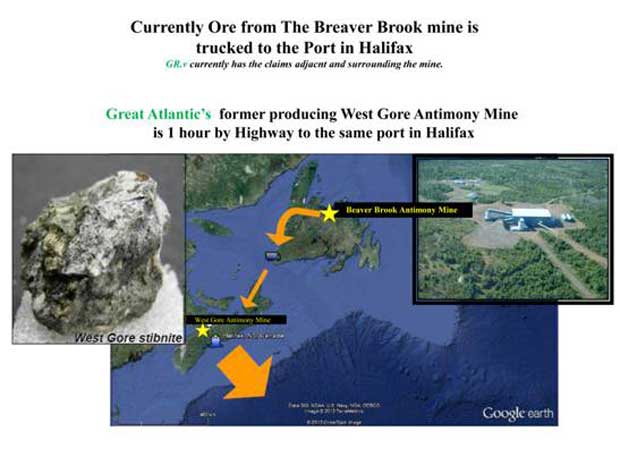 “The great thing about antimony is that where you find it you can also find gold,” says Anderson. “It’s a precursor for gold and is also an essential catalyst in the creation of polyester clothing. It’s used in liquid batteries and is a key ingredient in flame-retardant materials for textiles, plastics, and rubber.”

Similar to Tungsten, Antimony is under Chinese control. According to the British Geological Survey, Antimony is a critical metal, with current global reserves set to be depleted in under a decade. This has led to upwards pressure on the element, which has seen a price surge of over 400% since 2002.

The company also recently announced the acquisition of claims surrounding the Beaver Brooke Antimony Mine in Newfoundland. The Beaver Brooke properties comprise 5,562 contiguous acres west and adjacent to the mine. Not surprisingly, the mine is operated by a subsidiary of China’s Hunan Nonferrous Metals Corporation, the largest antimony company in the world.

FROM GOLD TO GRAPHITE

As if to prove Anderson’s point about antimony leading to gold, Great Atlantic recently acquired the West Gore Antimony and Gold Mine. Located approximately 45 kilometres northeast of Halifax, the 480-acre property has hosted exploration since 1880. The discovery of several significant veins led to the production of the mine, which produced an estimated 4,959 tons of antimony concentrate and 6,995 oz of gold between 1883 and 1917. Previous reports and recent exploration have given rise to the possibility of several other, undiscovered veins, which Great Atlantic aims to search for in the months ahead.

Trenching at the Shear Gold Mine and District

The 2012 exploration program on the Shear Mine property includes identifying several tungsten and gold targets. Historical assays from a shaft assayed up to 17.14 g/t Au, while subsequent sampling returned 9.6 g/t Au and 60 g/t Ag. Specific target areas identified include the Porphyry Zone, Otter Lake, Jimmy Hill, and the Shear Mine, which dates back to the 1860s. Summer saw the completion of trenching on the properties, and a new discovery of 4.84% copper has been reported.

In addition to the Shear Gold District and West Gore Antimony, Great Atlantic recently received a grant from the Nova Scotia government for exploration work on its 100% owned Christmas Island gold and graphite property. Having made considerable waves in the investing community the last two years, graphite has gained popularity due to its many industrial applications, such as pencils, paints, batteries, and brake linings. Yet its most intriguing use is as a key ingredient in “graphene,” a future “miracle material” that’s tougher than diamond but stretchable like rubber.

Previous trenching at Christmas Island shows up to 5 oz/t gold, as well as up to 20% graphite in shear zones. In early 2012, the company commenced exploration to expand known gold and graphite showings and to determine future drill targets. Field crews have expanded the prospecting program to explore several well-known gold occurrences, with results expected soon. While we wait for exploration results, it’s worth mentioning that Industrial Alliance Securities Inc. classified Great Atlantic as a mid-tier graphite explorer due to its established targets, most of which are drill-ready.

The company’s other graphite property, the Golden Grove in New Brunswick, further adds to its strategic potential. With future graphite demand expected to require a minimum of 4 new mines and as many as 23 outside India and China between now and 2020, the incentive to find large deposits is strong.

An old silver shaft on the Keymet property hints at undiscovered deposits.

Not to be outdone by the gold and graphite properties, Great Atlantic’s Keymet property hosts a former producing mine and numerous showings of gold, silver and base metal mineralization. Consisting of 162 mineral claims comprising 6,480 acres located in the famed Bathurst Region of New Brunswick, the Keymet has an extensive history since the first vein was discovered in 1882.

The world-class Bathurst Mine provides infrastructure. Historical core bodies are also maintained and intact, which will enable the company to assemble an exploration map.

The 2012 exploration program at Keymet tested two types of mineralization found in the northern parts of the claims, which contain historical grab samples that recorded 549 g/t Ag, 2.35% Cu, 33.90% Pb 22.90% Zn and 5.1 ounces per tonne. Geologists identified a 2500 metre drill program to test various targets within the two zones.

Having acquired the Tomahawk property in 2011 through staking, Great Atlantic plans to expand on historical channel sampling work, which indicated a 12 metre wide zone of 9.67 manganese, which is an element essential in iron and steel production.

The Porcupine is currently optioned to Explorex Resources. Having commissioned an NI 43-101 for the Porcupine property in December 2011, the report confirmed “an enhanced chargeability horizon and spatially distinct REE anomalies. Recently released initial results for trenching have been released, with assays pending.

As the numerous projects above illustrate, Great Atlantic has an energetic land-acquisition strategy that leans heavily on what it knows best: exploration.

When asked what the company’s long-term goals entail, Anderson points out that Great Atlantic wants to be an explorer, not a producer, and wants to find majors that are attracted to the company’s diverse assets. Having put together a company in the last 18 months, Great Atlantic has already established a base and assembled a team of well-known explorers. Targets for the remainder of 2012 include drilling on several of the company’s properties and raising interest in the projects in Canada and abroad.

Shortly after the announcement of a private placement on October 9, Great Atlantic pushed the financing from $300,000 to $600,000. The company submitted the first tranche of the financing shortly after. “As a junior, we have been assembling a strong portfolio of properties and raising money, says Anderson. “Our core support is very strong.”

With the year-end approaching, Great Atlantic finds itself with a tight share structure, a solid cash position and a strong selection of high-potential properties. The critical shortage of both antimony and tungsten present a blue-sky opportunity for Great Atlantic, while the ongoing development of graphite uses presents a compelling investment. Combined with the projected increase in Chinese demand and the mining-friendly environment of Atlantic Canada, the company’s actions are gaining attention.

Great Atlantic’s statement “gold by nature is money” reflects the ongoing dilemma central banks now face as they race to acquire gold while the world’s monetary system heads down a path of self-destruction. The demand for the yellow metal is unprecedented, with China and India at the helm as net purchasers. Thus, as gold likely gains prominence in the months ahead, it stands that Great Atlantic’s ongoing precious metals hunt will strengthen the company brand.

GR’s recent financing opens the doors to increased exploration in the months ahead.

With the Fraser Institute’s No 1 title bestowed upon New Brunswick, Great Atlantic is able to focus on several of its projects with limited bureaucracy. And unlike many juniors, Great Atlantic doesn’t sell itself on promises of mines; rather, they focus solely on a Project Generator model. This, combined with the company’s bargain stock price, presents a tempting investment.

Judging from the company’s growing project list, it’s safe to say that not only do they know how to find deposits, they also enjoy it. As Anderson points out, “What it really boils down to is that we all love our jobs. It’s the best way to build a team.”