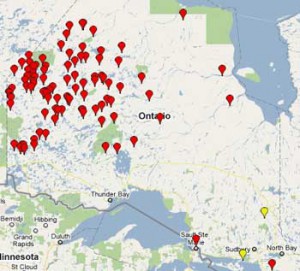 THUNDER BAY – The 2011 Forest Fire Season ended officially on October 31 2011. Last year, across Ontario, 1,330 forest fires consumed 632,533 hectares of forest. It was not a record, but it represented a major number of fires.

Right now, in Northwestern Ontario, there are nine active fires, and of those the causes of those fires are human action. Clearly greater caution in the woodlands is needed by more people in the region. Heading into the 2012 Fire Season, there are concerns over the lack of snow over the winter, and the fast melt this spring.