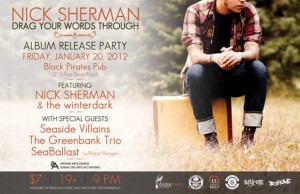 THUNDER BAY – Nick Sherman, a solo musician and performer from Sioux Lookout, ON, has recently completed his first full length studio recording, entitled ‘Drag Your Words Through’, and will be releasing it at the Black Pirates Pub in Thunder Bay on January 20th.

Nick took an interest in music at an early age. Before even picking up an instrument, he listened to his grandfather play guitar on the traplines near North Caribou Lake, ON. As he grew up, he started performing in various different bands in the region, ranging in style from acoustic blues to punk rock and metal. In 2005, he started writing down his own songs. Since starting that process, his solo career has blossomed, having played at several regional music festivals, including Trout Forest Music Festival (Ear Falls, ON), Superior Youth Festival (Thunder Bay, ON), and the Sioux Mountain Music Festival in Sioux Lookout for 8 straight years. He has also shared stages with the likes of Billy Joe Green, Pierre Schryer Band, Shy-Anne Hovorka, and other more recognizable artists at festivals, such as The Sheepdogs, to name a few. His current backing band, ‘The Winterdark’ is comprised of Dennis Dumphy (drums), Chris Dorota (bass) and Jean-Paul De Roover (guitar).

About ‘Drag Your Words Through’: “Drag Your Words Through” is a collection of songs written between 2005 and 2011, touching on life in Northern Canada, personal relationships, the hardships students from reserves face when they move to urban areas, and even the passing of a friend who froze to death, all told by an aboriginal songwriter. The album was recorded in Thunder Bay at Dining Room Studios, with producer Jean-Paul De Roover, and funded in part by the Ontario Arts Council. The songs span over a variety of different styles, with solo folk gems, horn-filled anthems, a piano ballad, and many other guest performances by Thunder Bay musicians.