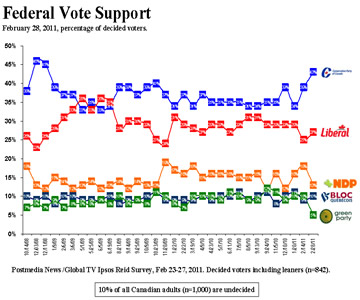 THUNDER BAY – There are several points of note in the latest Ipsos Reid poll. First the federal Conservatives are at 43%, with the Liberals trailing at 27%. The real number however is that the support for the New Democrats appears to be falling with 13% support, a drop of 5% in the past month.

With the federal budget now scheduled to be brought down on March 22nd, the NDP will have a decision to make in terms of supporting the budget, or not.

Ipsos Reid suggests, “Tory attack ads against Michael Ignatieff, Conservative commercials extolling the virtues of Prime Minister Stephen Harper, positive economic reports and the threat of an imminent election appear to have the Tories knocking on a majority’s door”.

If an election were held tomorrow, this poll suggests that “43% of decided voters would support Stephen Harper and the Conservatives, up 4 points from early February. In comparison, Michael Ignatieff and the Liberals would receive 27% support, up 2 points. The Conservatives haven’t been this high in the polls since they catapulted to 46% immediately following the General Election in October, 2008. They’ve reached 39% support many times over the last two-and-a-half years, but only hit 40% once in the fall of 2009”.

The rising fortunes of the Conservative Party are primarily a function of developing a strong lead in the seat-rich province of Ontario. Within Ontario, the Conservatives would receive 45% support among decided voters, compared to 33% for the Liberals. The NDP (14%), Green Party (4%) and other parties (3%) lag behind. In Quebec, the Bloc (41%) continues to lead, with the Liberals (27%), Conservatives (19%), NDP (6%), Green Party (4%) and other parties (3%) trailing.

For the New Democrats, the move into campaign mode at the national level appears to be one of the indicators that the drop in support may also be finding its way into internal party polls.

The NDP have launched their air campaign, seeking to reach out to voters.

What may be the real problem however is that if Canadians are starting to want a majority government, it is possible that support will head to the Liberals from voters who are opposed to a Conservative majority. That could impact NDP numbers in terms of seats.

Here in Thunder Bay, both seats in the federal parliament are held by NDP MPs Bruce Hyer and John Rafferty. Both MPs have brought forward private members legislation which offer benefits for pensioners and for wireless phone users. However if people are seeing a major shift to the right in Thunder Bay their challenges will be in reaching out to their base and beyond for support.

Federal Liberal candidate Yves Fricot appears to be hitting his political stride in Thunder Bay Superior North. So too has Richard Harvey the Conservative challenger.

On the south side, the Liberal candidate is Ken Boshcoff. There have been rumours that Boshcoff might step back from the federal race after being elected to Thunder Bay City Council. However there has been no official word from the long-serving MP that he is stepping back from the federal campaign. Maureen Comuzzi-Stehman the Conservative candidate got off to a slow start, but her campaign started to ramp up over the past several weeks.

A prediction, Ken Boshcoff will stay in the federal race. If Comuzzi-Stehman can get her wheels turning at full speed, and the Conservative poll numbers remain strong

What is positive, regardless of what candidate, or party that you support, there is a move by candidates toward greater public engagement. Candidates are reaching out through door-knocking, public meetings, the Internet, and social-networking to reach voters. It is a welcome change, and one that all voters in our community should be encouraging.