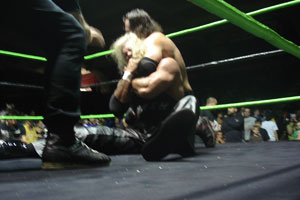 The night included the triumphant return of Vampiro to Thunder Bay. Vampiro, or Ian Hodgkinson, dedicated the night to the children of Gull Bay First Nation, along with his mother Edna.

Through the course of the week, Hodgkinson was in Gull Bay along with George Chavalo spreading a message of hope to the youth of Gull Bay First Nation. The young people took up the challenge and have also formed Canada’s first chapter of the Guardian Angels.

Tonight Vampiro was challenged by Vinny Glyde who was accompanied to the ring by the ever-busy Dee Rock of Rock 94. Glyde tried every trick in his arsenal of wrestling moves, including involving the lovely radio host Dee in the match.

It was all for not! Vampiro was the winner.

Lanny “The Genius” Poffo, who has formed a solid bond with many of Thunder Bay’s young people, especially a large cheering section from the Boys and Girls Club of Thunder Bay was taken to task by up and coming Jeremy Prophet.

Prophet, one of the rising stars in the independent circuit, showed a great deal of ring moxie raising the ire of the crowd with his skills.

The Honky Tonk Man was the easy winner over “The Shocker”. The crowd in the Gardens was more than ready for the “shake, rattle and roll” style of the greatest Intercontinental champion of all time. It could be, as Gordon Pitt told a business crowd in Thunder Bay a few weeks ago, that “Thunder Bay is a western city”. 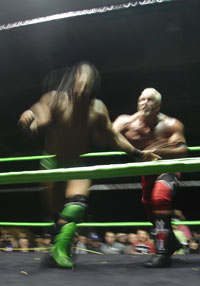 Big Poppa Pump, Scott Steiner served double duty in the card. First Steiner was the winner in a handicap match against The New Orient Express, a tag team combination.

The New Orient Express was endorsed by Jeremy Prophet, who also challenged Steiner to a match. After making quick work of the tag team challenge, Steiner took on Prophet n a high-flying match that for a while looked as if the up-and-coming Prophet could win.

Through all the battles, both in and out of the ring, the eventual winner was Big Poppa Pump.

The event was preceded by what is now a world-famous event – the Terry Funk Incident. The press conference assault by Hannibal on Terry Funk which happened at the Prince Arthur Hotel in Thunder Bay.

Perhaps because of a vicious attack on Terry Funk on Friday, Hannibal certainly was not a fan favourite. The crowd was firmly in the corner of the seven-foot-tall Nash.

It was a particularly rough match with Hannibal tossing Terry Funk out of the ring onto the concrete floor of the Gardens. Hannibal could have won the match except for that mistake as he put a devastating move on Nash, but there was no referee there to make the three count.

Nash recovered, and ended up putting Hannibal through a table to deliver the win that the partisan Thunder Bay crowd demanded.

From the reaction of wrestling fans after the event, it appears that this card was a fan favourite and a major step upward for professional wrestling in Thunder Bay.