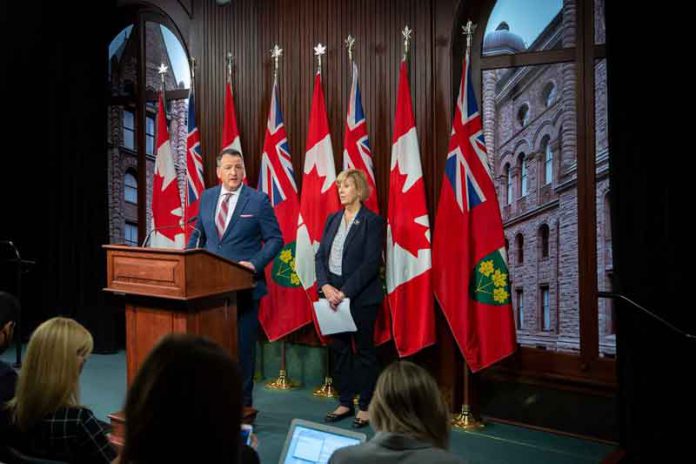 QUEENS PARK – POLITICS –  Minister of Finance Peter Bethlenfalvy released the 2022 Ontario Economic Outlook and Fiscal Review – Ontario’s Plan to Build: A Progress Update. It includes the government’s first-ever progress report on its plan to build Ontario, as well as new targeted measures that advance its plan to build the economy, address the province’s labour shortage and help families and businesses keep costs down.

“Our government’s 2022 Fall Economic Statement highlights a number of new targeted investments that will make life more affordable for businesses, prosperous for students, and easier for families across the Northwest” said Greg Rickford, Member of Provincial Parliament for Kenora – Rainy River. “As outlined in our first-ever Building Ontario Progress Report, Northern Ontario continues to be a leader in attracting world class investment.”

The government is also providing an update on Ontario’s economic and fiscal outlook, highlighting how its flexible and responsible plan is positioning the province to be ready to manage uncertainty and risk as the world faces high inflation and emerging economic challenges.

“Together, we have come so far,” said Minister Bethlenfalvy. “From attracting investments and good jobs, to training thousands of skilled trades workers and helping keep costs down for families, we have made significant progress. As we navigate these uncertain economic times, our government is enhancing its plan through new targeted measures that support families, seniors and small businesses.”

Highlights of targeted measures that advance the government’s plan include:

• Launching a voluntary clean energy credit registry to boost competitiveness, attract jobs and provide businesses with more choice in how they pursue their environmental and sustainability goals, as enabled by proposed legislation.

• Making changes that would allow a person with a disability on the ODSP to keep more of the money they earn by increasing the monthly earnings exemption from $200 to $1,000 per month. This would allow the approximately 25,000 individuals currently in the workforce to keep more of their earnings and could encourage as many as 25,000 more to participate in the workforce.

• Planning to adjust the maximum monthly amount for the Assistance for Children with Severe Disabilities program annually to inflation, beginning in July 2023.

• Helping to manage rising costs for low-income people with disabilities by planning to adjust core allowances under the Ontario Disability Support Program (ODSP) to inflation annually, beginning in July 2023.

• Investing an additional $40 million in 2022–23, for a total of $145 million for the latest round of funding in the Skills Development Fund, which has already helped over 393,000 people take the next step in their careers in in-demand industries.

• Investing an additional $4.8 million over two years, beginning in 2023–24, to expand the Dual Credit program, encouraging more secondary school students to enter a career in the skilled trades or in early childhood education.

• Proposing to extend the cuts to the gas tax and fuel tax rates so that the rate of tax on gasoline and fuel (diesel) would remain at 9 cents per litre until December 31, 2023.

• Helping to manage costs for about 200,000 of Ontario’s lowest-income seniors by proposing to double the Guaranteed Annual Income System payment for all recipients for 12 months starting January 2023, a maximum increase of almost $1,000 per person in 2023.

• Proposing to expand eligible expenditures for the Ontario Production Services Tax Credit to include location fees to help attract domestic and foreign film and television production to the province and incentivize more on-location filming in communities across Ontario.

• Attracted $16 billion in transformative automotive investments in Ontario by global automakers and suppliers of electric vehicle batteries and battery materials over the last two years.

• Attracted $2.5 billion in investments over the past year that will support transformation in the steel sector and help make the province a world‐leading producer of low‐carbon steel.

• Supporting an estimated $8.7 billion in cost savings and support for Ontario businesses in 2022, with $4.0 billion going to small businesses, through actions such as lowering payroll costs and providing electricity price relief.

• Unleashing the economic potential of critical minerals, including those in the Ring of Fire, with Ontario’s first-ever Critical Minerals Strategy and a commitment of close to $1 billion to support critical legacy infrastructure such as all-season roads to the Ring of Fire.

• Adding over 11,700 health care workers, including nurses and personal support workers, since 2020; as well as over 800 internationally educated nurses who have become licensed nurses in Ontario through government-funded programming.

• Approximately $25.1 billion in highway expansion and rehabilitation over the next 10 years to connect communities, fight gridlock and keep goods and people moving across the province.

• As global economic conditions remain uncertain, driven by a variety of factors beyond the government’s control, the government has developed Faster Growth and Slower Growth scenarios that the economy could take over the next several years to provide more transparency about how alternative economic scenarios could impact Ontario’s finances.

• The government is committed to eliminating the province’s structural deficit in light of ongoing economic uncertainty and fiscal challenges, and is redoubling its efforts to bring Ontario’s finances back to balance.

• Read highlights of Ontario’s Plan to Build: A Progress Update