THUNDER BAY – OPINION – When you slow it down, walking through our city, or biking across our city, you tend to see a lot more than driving in a vehicle. Slowing down lets you see what is happening front and centre.

In our ever technical and fast paced world, slowing down helps you see things the way they really are.

From a bike, or on foot, sadly often you see the people passed out from drugs or alcohol use. You will see them in all parts of the city. Early in the morning, you see the people sleeping in bus shelters, like in the picture atop this article taken on September 15, 2022. Makes one wonder, how many people drove by overnight and saw it?

You can see on the sidewalks in our city, the blood from fights that happen across Thunder Bay. Fortunately today, the rain has washed this away.

Early in the morning, often as early as 5:15 am, you will see women walking the sidewalks, sometimes shirts torn, sometimes intoxicated, and sometimes bruised and bleeding. Its not a pretty sight. Sadly it happens a lot.

Early in the morning, you will see young women working the streets, selling their bodies to old men. Is it to pay off a drug debt? Is it to earn money for more drugs? It is hard to say.

Early in the morning, often you will find intoxicated people inside the foyers of banks sleeping it off. This was common in the downtown Fort William area, and ended up solved when the CIBC and Scotia Banks both closed. In the Port Arthur Waterfront BIA, the Scotia Bank is frequently closed. Rumour is it might permanently close. The BMO in the Waterfront District has already closed. The Royal Bank in downtown Port Arthur closed years ago. The CIBC remains open.

Through the day, you see discarded syringes from the needle exchange(s) here in the city. The evidence of drug problems in our city is significant.

But to most it is an unseen problem.

It is a problem that has been ongoing for a long time and while there is occasional action, the fact is inaction is far more common.

That there is a problem with addiction in our city can be seen in the deaths from overdoses, the increased violence as drug gangs fight it out on our streets to maintain control of their deadly marketshare.

Yet it often seems this is the unseen problem.

In the news the reports on arrests are all too frequent.

This is a rate 400 per cent greater than the Ontario average.

There are an average of 73 deaths annually from opioid overdose.

The problem can be seen across the city in increased crime. Assaults, break-ins, and calls for service to police over domestic abuse issues are all too common.

The courts are filled with accused people over issues with drugs and alcohol.

Often people with addiction issues end up released, released without direction for treatment but rather simply told no drugs or alcohol. For an addicted person, that is basically impossible, but they will agree just to get out of custody on bail.

Alcohol takes a huge toll in our city as well. Across the city it is very obvious in many of our parks, along river banks, and out of sight of course in homes across the city.

Thunder Bay remains a city where “Getting Drunk” on the weekend remains a goal for many.

During the coming weeks, candidates seeking a seat in the Council Chamber at 500 Donald Street East are going to be telling you how they will deal with the problems our community faces.

What it comes down to in reality, with all due respect to all those candidates is that the truth is solving the problems of addiction in Thunder Bay are going to take some serious evolution in thinking.

Toss ‘Em in Jail – Throw Away the Key!

The Thunder Bay District Jail has had the tender awarded for that aging facility to be replaced. The truth, however, is that jailing people who are suffering from addiction has not worked, and will not work. My guess is that once there is a new jail, it will be filled as quickly as possible.

The Court House on Brodie Street was sold to citizens as one of the steps to re-vitalizing downtown Fort William.

The truth is it really has not. The price tag of $500 million dollars for that facility has seen long lines of cases continue.

It has not seen major numbers of people flocking to shops in the area. Even restaurant wise, there has not been any major boost in the area.

There is a saying, “Nature abhors a vacuum”. The new jail, which is needed frankly, will likely hit the $1.2 billion mark or more due to inflation, before it is completed. Likely once open, judges and justices will be more inclined to remand people into custody.

The justice won’t be there, but the legal industry will thrive.

What seems missing from the equation toward solving the problems of crime, and addiction are prevention and treatment.

Often there can be lurid “reports” of crime online, where people assault, or murder people while under the influence of illicit drugs or alcohol. Often the tabloid style reports seek to shame and embarrass accused people.

You can see the terrible comments on accused, as people seemingly forget how our justice system works.

Innocent until proven guilty. That is why responsible reporting doesn’t seek to shame an accused.

The tabloid approach has not fully helped. Thunder Bay Police have seen the impact as investigations into leaks have lead to issues within the Police Services Board, and within the service as well.

Perhaps missing in this entire process is that the problem of Toronto / Ottawa drug gangs in our city is the increased violence and increased deaths, and the homicides are all based in drug addiction.

If there was less demand or even no demand for illicit drugs, these gangs would not be here working to profit from the drug marketplace.

Yet, still Thunder Bay is lacking in sufficient treatment facilities. Over the past ten years, as we have seen the opioid crisis grow, it was first raised by then Nishnawbe Aski Nation Grand Chief Stan Beardy, the fact is almost nothing has been done.

Funding for drug and alcohol treatment, finding solid ways for Indigneous people to put their lives back on solid ground after the terrible atrocities of Residential School, the Sixties Scoop, the Millennial Scoop has not fully happened.

Child welfare continues to be a massively missed opportunity to solve future problems.

Often from what people tell NetNewsLedger, CAS workers will come into homes after problems and their real efforts toward healing a family’s strife is dropping of purchase orders so people can buy food. The idea of fully solving the root problems and putting families back together seems secondary at best.

We have see documents from Child Welfare agencies that rather than offer a pathway out of addiction will simply seek the parents to find somewhere for their children to be when they are drinking.

In countless cases, CAS only became involved because of issues with addiction overtaking a family. To honestly enable the idea of continuing on that path puts into question the real goals of CAS workers and management. Is it a customer for life or a united and healthy family.

When the Child Welfare agencies take that kind of approach, it appears family care and welfare are not the main concerns.

Sadly what can start as drinking to overcome trauma will often become increased trauma.

That can, and does lead to more problems and obviously to no solutions.

It does point the way to what is needed, systemic change.

Successive federal and provincial and civic leaders have somehow seemingly missed efforts toward solving these problems which have grown and continue to grow.

Prevention – Worth Millions in Cure

Thunder Bay has few youth centres. They were a top priority only a few years ago under then City Manager Tim Commisso. That has shifted. While the City has some youth programs, some of those programs are out of the reach of many of the families struggling in poverty.

The current city council has focused on an indoor turf facility with thoughts it would help.

What it appears, at least to me is Thunder Bay is missing the target, and missing it by miles.

Thunder Bay has a few youth centres, along with the Underground Gym. There is the New Hope Youth Centre on Victoria Avenue. As well there is the Regional Multicultural Youth Council.

Matawa has created a Safe Sobering Site. That is a great idea. Is is a part of what was a long time ago part of the plan for a youth centre and residence for students at Dennis Franklin Cromarty High School. 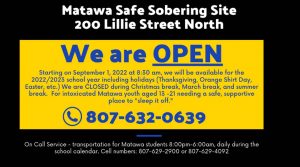 Our city should set a goal of becoming Canada’s leading centre for addiction treatment. Our community’s elected leaders should be working with federal and provincial partners to achieve that goal.

Our city should seek to emulate Medicine Hat Alberta where the municipality has taken on homelessness. In Thunder Bay a shocking – or should be shocking – claim of success that 13 homeless people had been housed in the past year, should have councillors seeking new approaches and far different people in charge of solving the problem.

Thunder Bay should be lobbying the provincial government for SCAN – Safer Communities and Neighbourhoods legislation. This is legislation that gives the police and property owners real power to shut down trap houses and get neighbourhoods safer.

Simply for candidates to promise results without having a real plan is to offer more “Business as Usual” – and if there is one thing the future of Thunder Bay doesn’t need is more of that.