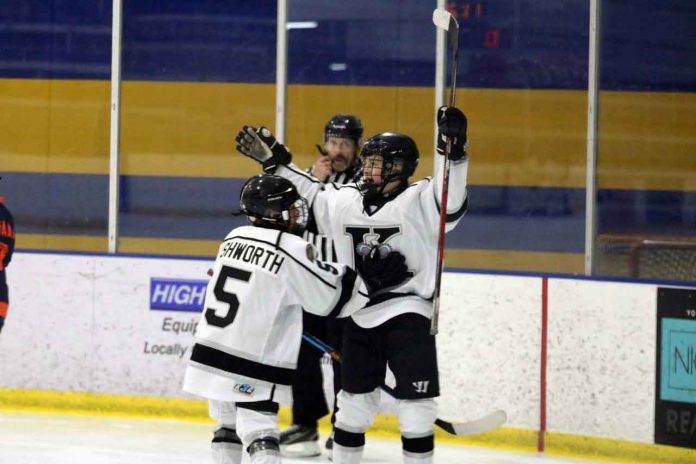 PLYMOUTH, Minn. – The Thunder Bay under-13 Kings have returned home from the Warrior Cup in Plymouth, Minn., where they finished with a 2-2 record, in their season-opening event.

Pacing the Kings offensively in the one-sided result were Owen Trevisanutto and Brady Nash, who each supplied hat tricks, while Mason Glousher dished out three assists.

Other goal-scorers in the one-sided result were Jace Voortman and Gavin Godick, who provided a pair, while Ethan Williamson and Copper Disher picked up singles.

Next came a 7-1 defeat against the eventual tournament champion, the Minnesota Bolts.

Nash provided the lone tally for Thunder Bay in the setback while goaltender Kainaan Macgillivray was peppered with 40 shots against.

In their third match-up, the Kings fell 4-3 to the Minnesota Bronzebacks, on a late goal against.

Tallying for Thunder Bay were Nash, Voortman and Benton Ashworth.

Johnson and Macgillivray both saw time between the pipes for the club.

A high-scoring affair then concluded the proceedings Sunday with the Kings prevailing via a 9-8 shootout victory over the Team Westwood.

Glousher had a three-goal game in the decision with Thunder Bay’s Voortman tacking on two.

Also finding the back of the net were Ashworth, Felix Sapay and Ethan Williamson.

Following a scoreless five-minute overtime, the teams went to extra shots to determine a winner.

There, Glousher and Voortman both converted once more, while netminder Macgillivray was solid, making four stops on five attempts against, to get the win.