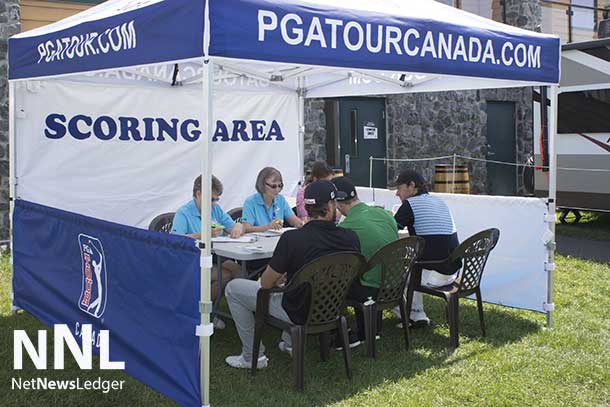 BRAINERD, Minnesota — Go figure. The first official PGA TOUR Canada event played in the United States got off to an even more international start. After one round of play at the CRMC Championship presented by Gertens, Alexander Herrmann of Germany is setting the pace. He shot a 9-under 61 at the Cragun’s Legacy Courses to take a one-stroke lead after 18 holes.

The 27-year-old from Munich, who played his college golf at Georgia State, had seven birdies and an eagle to pull in front of the pack. Things were going so well that Hermann came close to shooting a 59. He bogeyed his final hole (No. 9).

“I wasn’t even aware that if I would have made birdie that would have been a 59,” Herrmann said. “I had no idea about that. That makes it a little bit more annoying.”

On his closing hole, Herrmann added that he played into the wind and was just a little too aggressive. In retrospect, he wished he had used a 2-iron instead of a 3-wood on the hole.

“That was a mistake,” Herrmann acknowledged. “But that’s something I can learn from and be better the next time; try to be more patient and disciplined. There’s always something you can learn even though I played a great round today.”

Although Herrmann describes his play this season as OK, he hasn’t gotten the results he’s wanted.  He’s missed the cut three times in Canada, including last week’s CentrePort Canada Rail Park Manitoba Open, and has finished no higher than a tie for 40th in the other four tournaments where he’s played the weekend.

“I’m just trying to be very consistent in these last couple of events and just play solid golf,” he said. “The rest will take care of itself.”

Conner Godsey and Taylor Funk are one stroke behind Herrmann, at 8-under 62. Godsey, who played this season on the Korn Ferry Tour, credited his iron play for giving him a lot of opportunities. Funk, who fired a 28 on the back nine, admits that’s probably his best nine holes of his career.

“I don’t even think I’ve broken 30 in nine holes,” Funk said after his round. “I mean it’s obviously a bit easier being a par-35, but to shoot 7-under in nine holes is pretty amazing.”

Third place is shared by Fortinet Cup points leader Wil Bateman, Gavin Hall, Joe Highsmith, Thomas Walsh, Brett White and Peyton White, who aren’t related. They are all at 7-under. Bateman said the greens at Cragun’s Resort are “perfect” and continued to credit his good putting, something he’s enjoyed all season.

“I’m not getting too far ahead of myself. I know that there’s still a lot of golf to play this week,” Bateman explained. “So, I’ll keep hitting my lines and see what happens.”

Peyton White, who started on the back nine, had five birdies before hitting lengthy putts on Nos. 4, 5 and 6 to solidify his spot in contention.

“Making three in a row like that, you’re like ‘Holy Cow I’m feeling hot,’” said White, who began the year on the Korn Ferry Tour.

Did you know Alexander Herrmann finished first at the PGA TOUR Canada Qualifying Tournament in Weston, Florida, the first of seven qualifiers the Tour held in advance of this season?  Herrmann topped Wocheng Ye by five shots to earn an invitation to every tournament in 2022.

How the Canadians fared
There are 29 Canadians playing this week, with 19 turning in opening-round, under-par scores. Edmonton’s Wil Bateman leads the Canadian contingent, at 7-under.

Alexander Herrmann’s opening-round 61 was the lowest score this season on PGA TOUR Canada. Taylor Funk’s 28 on the back nine—-five birdies and an eagle—tied this year’s best nine-hole score. The other 28 this season came courtesy of James Allenby in the second round on the back nine at TPC Toronto at Osprey Valley. Parker Coody (10-under), Danny Walker (9-under) and Eric Lilleboe (8-under) all shot 62s earlier this season.

Conner Godsey recently finished his Korn Ferry Tour season, finishing 103rd on the Points List. This is his first PGA TOUR Canada start since August 2015. That season he played in eight tournaments and made one cut. In 2021-22, Godsey played on PGA TOUR Latinoamerica, won the Banco del Pacifico Open in Quito, Ecuador, and finished third on the Points List to earn his Korn Ferry Tour playing privileges.

In his last five rounds, Gavin Hall is a combined 25-under. He was 18-under last week and is 7-under to start this tournament. This stretch of good play came after Hall missed two consecutive cuts prior to his tie for third last week in Winnipeg.

Fortinet Cup points leader Wil Bateman holds a narrow 11-point lead over Danny Walker as PGA TOUR Canada enters its last three tournaments of the season. The Canadian pulled in front last week. “Playing with the points lead is interesting,” Bateman said. “Obviously you’re confident, and you know what you’re doing is working. But at the same time there’s that added pressure that you’re first.”

With his opening-round 63, Wil Bateman kept alive his streak of under-par rounds. It is currently at 10 consecutively, starting with the final round of the Sotheby’s International Realty Canada Ontario Open. Bateman’s previous-low score this season was 65, something he did three other times (second round at the Royal Beach Victoria Open and in the first and final rounds of his victory at the ATB Classic presented by Volvo Edmonton.

Brett White made eight birdies in Thursday’s opening round and finished 7-under on the day. The former Eastern Michigan standout credits one of his college roommates for offering a little help with his putting. White joked that he would have to buy Michael Blair dinner. “I was searching for something. I had been striking the ball so well for so long and putts just weren’t going in,” White said. “Putting is funny like that. Just one little tip and all of a sudden the ball is going in.” Blair advised White to move his eyeline a little more over the ball and get a little more head tilt.

All in all, it was a pretty good round for Monday’s qualifiers. Brendon Doyle led the way, at 5-under. He’s tied for 15th. Alex Kline and Jordan Niebrugge were just one stroke back, at 4-under (tied for 26th). Devin Morley (2-under, tied for 55th) and Travis Fredborg (1-under, tied for 76th) also shot under par. Joseph Juszczyk finished even, while Evan Long (1-over) and amateur Viraj Garewal were both 1-over on the day.

From the Locker Room

“This is a good start. But still there’s a lot of golf to be played. So you never know.” — Alexander Herrmann

“I’m playing well, and I’m mentally in a good space. But I’m focusing on [Friday]. I just want to hit that first tee shot in the fairway on No. 1 and then go from there.” — Wil Bateman

“It’s my first time in the state. The weather is nice. I live in Jacksonville, Florida, so it’s nice to get out of the heat.” — Conner Godsey

“The rain definitely helped it be a little softer. The greens were really firm for the practice rounds. But you were kind of able to control the ball where you landed it—within a five-to-10-foot radius. So, yeah, it was nice.” — Brett White

First-Round Weather: Partly sunny and warm high of 77. Wind variable out of the north at 3-7 mph.