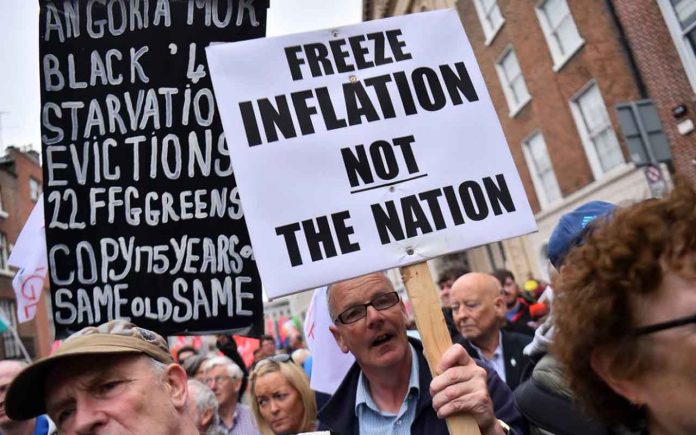 BRUSSELS – (Thomson Reuters Foundation) – Europe is facing a major social test ahead of winter, as it juggles rising discontent, fuelled by soaring energy prices, and pressure to meet climate goals as the Ukraine conflict drags on.

British grassroots group “Don’t Pay UK” is calling for people to boycott energy bills from Oct. 1, while the trade union-backed “Enough is Enough” campaign kicked off a series of rallies and actions in mid-August calling for pay rises, rent caps, cheaper energy and food, and taxes on the rich.

A worsening cost-of-living crisis across Europe has already seen workers in France, Spain and Belgium go out on strike in the public transport, health and aviation sectors, pushing for higher wages to help them cope with rocketing inflation.

Meanwhile, the European Union has committed to reducing its Russian fossil-fuel imports by two-thirds and cutting gas demand by 15% by year’s end. Before the Ukraine war, it had already set a target to become the first carbon-neutral continent by 2050.

The squeeze on oil and gas imports from Russia, after its February invasion of Ukraine, has left countries scrambling to plug the energy gap through a mix of energy efficiency measures, firing up old coal plants and boosting renewable energy projects.

“Nobody wants to see blackouts,” said Simone Tagliapietra, senior fellow at Bruegel, a Brussels-based economic think-tank, adding that all options must be considered to avoid that scenario, “including polluting ones”.

But climate campaigners want to see governments turn their back on fossil fuels entirely, invest more heavily in efficiency measures and add more renewables to their energy mix.

Whichever route they choose, the coming winter is set to be plagued by social unrest, warned Naomi Hossain, a professor of development politics at the American University in Washington D.C. who is studying energy, fuel and food riots.

At a conservative estimate, 10,000 such protests have taken place worldwide since last November, she told the Thomson Reuters Foundation – with more expected in an uncertain future.

“If I were a politician, I’d be really worried,” she added.

Faced with the threat of power outages, EU countries have introduced a raft of energy efficiency measures to help slash power bills, as annual inflation hits a record 8.9%, with about 4 percentage points of that due to more expensive energy.

Spanish citizens have been feeling the heat during a sizzling summer, after the government ordered air-conditioning to be set no cooler than 27 degrees Celsius (80.6F) in public buildings, hotels, restaurants and shopping centres.

France, meanwhile, is focusing on “energy sobriety” with measures to be launched by the end of summer including dimming illuminated public billboards overnight, and fining shops that leave doors open while using heating or cooling.

Germany, the EU state most dependent on Russian fuels, has announced heating limits of 19C (66.2F) in the winter for public buildings and colder public pools, while cities like Augsburg are contemplating which traffic lights to turn off.

Such efforts form part of a wider EU drive to slash gas demand as the bloc races to shore up supplies ahead of winter, amid fears Russia will further restrict gas deliveries in response to EU financial sanctions.

But energy savings have yet to ease the pressure of surging utility bills – and protests have been planned from Madrid to London for the autumn in response to the cost of living crisis.

When people start complaining en masse about their inability to pay for their basic needs – and must choose between heating or eating – it can overturn governments, said Hossain.

“Often an energy protest turns into a political protest, like in Sri Lanka,” where an uprising against an economic crisis led to the unseating of the president in July, she noted.

Such unrest can also see far right or left-wing parties “capturing the political energy from discontent”, as centrists baulk at price controls or expanding public services, she added.

Cassie Sutherland of C40 Cities, a network of major cities pushing for swift action on climate change, said measures were required to cushion the impact of energy inflation while also cutting emissions fast enough to limit global warming to 1.5C, the lower goal set by governments in the 2015 Paris Agreement.

She called for a policy focus on the “three Rs” of “relief, retrofit and renewables”: financial support for the poor, upgrading buildings to save energy starting with social housing, and scaling up investment in wind, solar and other renewables.

C40 Cities is pushing the European Commission to commit to retrofitting 6 million homes in the next year, which would boost the current housing renovation rate from 1% to 3%.

“The cheapest energy is the energy we don’t consume,” said BEUC Director General Monique Goyens. “Given recent developments, we can no longer afford to wait.”

As fears rise over energy insecurity, Germany, Italy, Austria and the Netherlands have signalled they will allow shuttered coal-fired plants to re-open or prolong operations beyond planned closure dates.

Pragmatism is driving decisions to revive polluting power plants, said Tagliapietra, adding that without stop-gap measures the economic and social consequences could be “devastating”.

But green advocates argue that relying on fossil fuels to keep the power on, even in the short term, will worsen the energy price crunch and jeopardise emissions reductions.

“It leads to continued problems with fluctuation in prices,” said Sutherland, noting that high energy costs are hitting vulnerable households the hardest.

And sticking with fossil fuels is also likely to increase carbon emissions, putting climate targets at risk, she added.

A new report from the Climate Crisis Advisory Group (CCAG), a panel of 16 international climate experts, called on governments to use the energy crisis to slash greenhouse gas emissions “deeply and rapidly” and accelerate the switch to renewables.

“If we push in that direction, we are creating a safer future,” said CCAG Chair David King.

He admitted that new solar and wind projects would take several years to come online – and would not come in time to help address the energy shortfall this winter.

Meanwhile, the financial pain being felt by voters spells trouble for Europe’s political establishment, said Hossain, urging governments to listen to what is happening on the streets and respond with measures to ease the pain.

“Until people feel like they’re being heard on energy needs, I don’t see any reason for them to stop protesting,” she added.