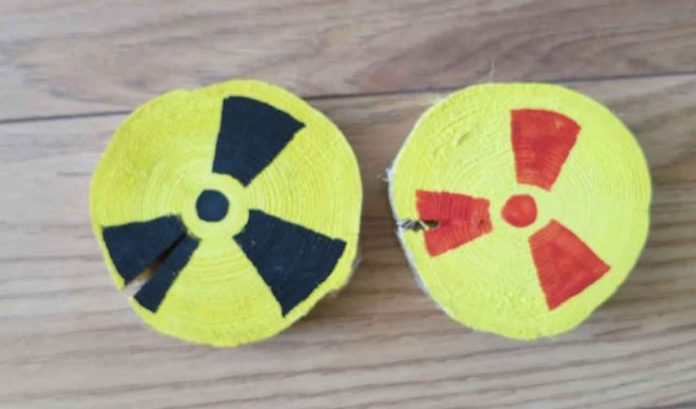 KENORA – NEWS – To raise awareness of the dangers of a proposed plan to bury and abandon highly radioactive nuclear fuel waste in Northwestern Ontario, We The Nuclear Free North (WTNFN) has announced the “Catch, Release & Never Abandon” puck contest.

Two-hundred-and-eighty yellow 1.5 to 3-inch cedar “nuke pucks,” hand-painted with black and red nuclear symbols have been released at the headwaters of the Turtle River and English-Wabigoon River systems east of Dryden, between Wabigoon and Ignace. They will float downstream to demonstrate the threat of radiation to communities along these waterways.

Two prizes will be awarded to photographers who post photos of pucks in their localities to the WTNFN Facebook page: one prize for the photo of the puck found furthest west, and another for the best puck photo with water in the background.

The floating pucks are not radioactive and are harmless to the environment. We The Nuclear Free North will track and publicize the downstream locations where pucks are reported.

Downstream communities include Atikokan, Fort Frances, Dryden, Kenora and Winnipeg, and First Nations such as Wabigoon Lake Ojibway Nation, Grassy Narrows, Couchiching, Mitaanjigamiing. These communities and others could be affected in the event of release of radioactive material into the watershed areas.