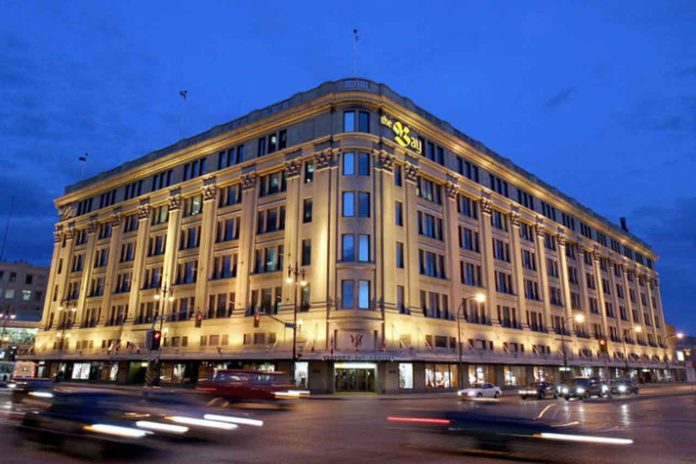 On May 2, 1670, King Charles II of England signed a royal charter, granting a monopoly over all land in the Hudson Bay drainage basin to be governed by his cousin Prince Rupert.

The fact Indigenous communities had lived and thrived in “Rupert’s Land” (some 3.8 million square kilometres) for thousands of years didn’t matter. These communities were not “civilized,” Christian, and thus — under the Doctrine of Discovery — had no land claims.

They were, in the eyes of the king, barely human.

The charter did, however, promise to pay “rent” of sorts to Indigenous leaders his representatives met: two beaver pelts and two elk hides. (A promise only filled a handful of times, then quickly forgotten.)

The Hudson’s Bay Company, which ran a trading monopoly and dominated social, economical, and political life in the area.

On the day the downtown Bay opened at 9 a.m. Nov. 18, 1926, it was the largest reinforced concrete building in Canada.

In 1870, HBC would surrender the entirety of Rupert’s Land to the newly formed country of Canada — a decision that angered Indigenous communities (particularly the Métis). Soon after, Manitoba, Canada’s first post-Confederation province, was established.

For a century-and-a-half, HBC would continue to run trading posts, stores, and be an economic and political force in Manitoba.

In 1926, the company opened a monument to its legacy: a six-storey, 60,000-square-metre building at 450 Portage Ave. in downtown Winnipeg.

At the time, it was the largest reinforced concrete building in the country; an homage to British imperialism. Another way to think of it: a structure of racism; a goliath pile of concrete built off and on stolen Indigenous lands and resources.

Here, the company would run one of the largest department stores and house some of the most decadent and elite of British Canadian institutions; an orchestra, a library, and restaurant.

This is the building all Winnipeggers, such as myself, grew up with: a normalized block of concrete built on the premise Indigenous peoples aren’t human beings.

That is, until November 2020, when HBC — after extracting billions of dollars of profit from every inch of the territories it entered — abandoned its flagship, taking Canada’s oldest running business to other lands to extract whatever it can.

For two years, the HBC left its mess in downtown Winnipeg, leaving the city to wonder what to do with an aging, decrepit, worthless building in dire need of millions of dollars in renovation.

On a Friday in late April, more than 350 years since King Charles II pronounced Indigenous Peoples and lands don’t matter, Indigenous people offered to clean up the mess.

Returning the symbolic gift of two beaver pelts and two elk hides to Richard Baker, governor and executive chairman of HBC, the Southern Chiefs’ Organization offered to take responsibility for the building.

Alongside funding from all levels of government, the massive renovation project promises to revitalize downtown and create a destination of reconciliation.

Calling this “gift” of the HBC building a “historic and monumental” gesture, SCO Grand Chief Jerry Daniels called it “the standard of what reconciliation in our country can look like.”

The project will be called Wehwehneh Bahgahkinahgohn, meaning “it is visible” or “to be seen” in Anishinaabemowin.

Plans also include a health centre for traditional and western medicines, and supports for elders and residential school survivors.

The building will become all things Indigenous Peoples and all of our relations are: dynamic, creative, and undeniably human.

Prime Minister Justin Trudeau, in Winnipeg for the announcement, called it a chance to “rebuild trust, rebuild landmarks, and rebuild relationships.”

A better way to say it might be the building that should have been built in the first place, if not for the arrogance, disrespect and racism of ancestors hell bent on ownership instead of relationship.

A page where, for the first time in the history of the relationship between HBC and Indigenous Peoples, the word reconciliation can be used in a new chapter to be written.

Originally appeared in the Winnipeg Free Press in April 2022. Republished with the permission of the author.