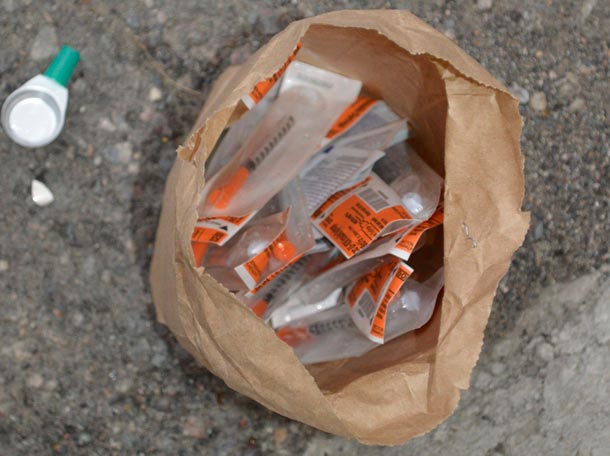 The arrival of spring and the melting snow will uncover large amounts of litter on city streets, and the Thunder Bay Drug Strategy would like to remind people to be careful if they find discarded needle(s).

If a needle is found, people are asked to contact Superior Points to deal with the discarded needles, or take some simple steps to safely dispose of the needles themselves.

“The vast majority of people who use drugs dispose of their equipment, including syringes, responsibly,” says Cynthia Olsen, Thunder Bay Drug Strategy Coordinator. “However, many times needles that are unused are discarded on the ground, and may be uncovered as snow melts.”

Steps to safely handle needles that are found include:

Drop off single needles into any of the yellow metal disposal bins found throughout the City. For locations, visit TBDHU.com and click on sexual health, then needle exchange.

There are 16 metal needle disposal bins located throughout the city.

The risk of getting an infection from a needle stick is very low, but if people are picking up needles, they should still do so with great care.

Needle disposal kits are available from the Thunder Bay District Health Unit through Superior Points, or at Elevate NWO. The kits include tongs, a plastic container, rubber gloves and safety instructions.