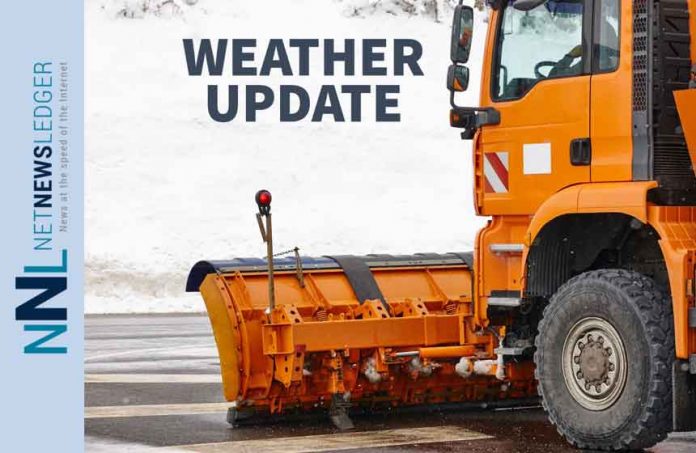 THUNDER BAY – WEATHER – In a word, SNOW. Western Ontario is under weather advisories and snowfall warnings for Tuesday. Environment Canada says up to thirty centimetres of snow is expected in Thunder Bay. However other weather models are showing the possibility of more snow. It will all depend on the temperature, and on the speed of the storm coming across the region.

Precipitation will slowly move in this morning as snow at times mixed with ice pellets. A brief risk of freezing rain is also possible near the Minnesota border. Precipitation will change over to all snow this evening. Light snow may persist through Wednesday in some areas, though significant accumulations are not expected on Wednesday.

The following buses will be cancelled on Tuesday, March 22 due to inclement weather and road conditions:

Dryden/Vermilion Bay – All routes are cancelled

Sioux Lookout – All routes are cancelled

Upsala/Ignace – UP82 and IG14 are cancelled

There is a snowfall warning in effect. It is at the freezing mark in Thunder Bay this morning at 07:00 EDT. Snow mixed with ice pellets will start by late this morning. Local snow and ice pellet amount of five centimetres are expected. Wind will be from the east at 30 km/h gusting to 50. The temperature will remain steady near -1. Wind chill -12 this morning and -7 this afternoon.

Tonight will see snow continue with local amounts of 10 to 15 centimetres. Winds will be from the east at 20 km/h gusting to 40 becoming light after midnight. Temperature steady near -1. Wind chill -8 this evening.

Fort Frances is under a Special Weather Advisory. For Tuesday, expect snow becoming mixed with rain late this morning and ending this afternoon then cloudy skies with a 60 per cent chance of light snow or drizzle. Local snowfall amounts of up to five centimetres are forecast. Winds will be light at up to 15 km/h. High of +2. Wind chill -5 this morning.

Tonight the forecast is for cloudy skies with a 60 per cent chance of light snow or drizzle. There is a risk of freezing drizzle late this evening and overnight. Low overnight of -1.

Snowfall Warning in Effect. It is -3 this morning in Dryden. The forecast is for snow, at times heavy, becoming mixed with rain by this afternoon. Snowfall amount of up to 15 centimetres are predicted by Environment Canada. Winds will be southeast at 20 km/h gusting to 40 becoming light this morning. High +2. Wind chill -8 this morning.

Tonight will see periods of snow ending near midnight then cloudy skies with a 60 per cent chance of light snow. Snow mixed with rain is likely early this evening. There is a risk of freezing drizzle overnight. Further snowfall amounts of 2 to 4 centimetres are expected. Wind up to 15 km/h. Low -2. Wind chill -5 overnight.

It is -11 to start your Tuesday in Sachigo Lake. There will be increasing cloudiness with periods of snow beginning near noon. We are calling for up to two centimetres of snow. Winds will be from the southeast at 20 km/h. High of zero for Tuesday. Wind chill -17 this morning.

Tonight will see periods of snow ending overnight then cloudy skies with a 40 per cent chance of flurries. There is a risk of freezing drizzle overnight. Two to four centimetres of snow are expected tonight. Winds will be light at up to 15 km/h. Low -4. Wind chill -7 overnight.