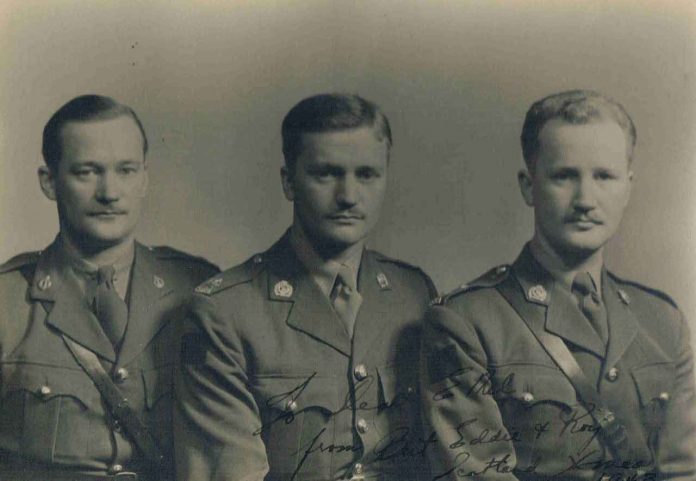 Thunder Bay – In 2008 I took it upon myself to write an article that I thought I would send to my old home town newspaper in Thunder Bay, Ontario, Canada. The article was to be about my experience as the son of decorated World War Two veteran, Major Roy Styffe. It was not completed in time. What held me back is that I did not fully comprehend the enormity of this task emotionally.

I eventually did finish the article in 2010 and sent it into my hometown newspaper in Thunder Bay but it was not published. Still has not but will send anyways every year. So every year I rer-ead it, edit it and post it on my facebook. It is also on the Rue du Major E.G. Styffe memorial webpage.

In this article I wanted to share my observations and feelings about being the son of someone who had been to war. I soon realized that I did not know how I truly felt. It was a confusion created by what I should feel, what I am expected to feel, what I truly felt or what I did not feel at all.

My father and his two brothers, Major Edward G. Styffe and Major Hobart Styffe were officers in the Canadian army. Their sister Ingrid spent two years in the Red Cross Transport Corps before joining the Women’s Royal Canadian Navel Service as a Wren in 1942. She and her brothers were quite close and communicated often during the war.(I still have some copies of this communication) My father, Roy, was decorated with the Distinguish Service Order(DSO). My uncle Edward was killed in Normandy when a vehicle he was in took a direct hit. So, you can imagine that World War Two played an important role in my family.

Remembrance Day which is on November 11th commemorates the sacrifices of the armed forces and of civilians in times of war. Of course it was an important day in my family. The custom of observing Remembrance on November the 11th began with the end of the first World War which ended on 11 hour of the 11th day of 11th month. Remembrance day which is observed in many commonwealth countries is a holiday in Canada. As a child it was also a day off from school; as with many holidays now celebrated it was viewed more as a holiday than for its intended purpose.

Of course, I was not running around the house with glee on this day. This was an important day for my father so we kept a low profile, out of respect for him and it was the appropriate thing to do. Every so often I would watch the parade of veterans as they marched to the cenotaph to lay wreaths in memory of their fallen comrades. Yes, I did feel pride of my father as he marched past in unison, face forward, head up, wearing his medals and his red beret.

In addition, as it was customary for all ages, I wore a red poppy which signified the poppies that bloomed across some of the worst battlefields of Flanders Fields in World War I, their red colour an appropriate symbol for the bloodshed of trench warfare.

When I was sixteen, I accompanied my father and mother and the veterans of the Lake Superior Regiment on a tour to retrace the steps they took during the War. We started off in Holland, then through Belgium ending up in France. I was truly amazed and impressed by the reception, the welcome and festivities in each village that we visited. On several occasions our buses were guided by a motorcade going into the villages. These people most certainly had not forgotten and wanted to show their appreciation to these Canadian veterans.

In Normandy, we visited the grave of my uncle Major E.G. Styffe. I still have the picture of my mother and I standing over the grave. My father was not in very good shape as the memories came flooding back.

To be honest, I did not fully grasp or appreciate what my father and my Uncle had done. Besides living a life, of constant reminders of my father’s participation in this great war it was not until after my father had passed away, about 23 years ago this month, when late at night, I was reading a book that was written about the regiment. It described a battle, in a placed called the Falaise gap. The battle was waged for days with bombs exploding 24 hours day. I do remember my father telling me of the horror of the men being exhausted because they had not slept for days. He told me how they were so tired that they did not dig the fox holes as they called them to sleep in. They just dropped to the ground. It was the practice that during the night the armoured division would advance but this time driving over the men who were supposed to be sleeping in the fox holes. It was then that I partially grasped what he had experienced. I broke down and cried. I know this was part of the mourning process but it was also the knowing that I would not be able to express my appreciation to him.

On the 8th of May 2001, the village of Maizieres, France, dedicated a street to the memory of Major Edward G. Styffe. At the moment the whole of France commemorated the anniversary of the victory, the inhabitants welcomed the family and friends of a Canadian war hero of the battel of Laiziôn who died in combat on the 14th of August 1944. The village named the main street after him. The street is called “Rue du Major E.G. Styffe

When he was alive, my father and I really never talked about his experiences during the war, because the memories were just too hard to recall. Today, I believe that he suffered from post traumatic stress disorder. Coupled with the belief of not showing ones feelings, these memories lay buried deep often negatively affecting his relationship with his family. On his death bed in a delirium, he spoke of events during the war.

My father wanted to go to war. He told me how he went back to school to get his matriculation so he could be an officer. There was an excitement but I am sure it was covering up a lot more feelings.

My father met my mother in St. John New Brunswick where the regiment was stationed. She had also met his brother Eddie and she told me that they were sitting at the piano as he was musically talented. He told her that knew he would not return. Unfortunately, this proved to be true.

As I began to write this article, I asked myself what did I really feel? What should I feel? Of course there was the sadness of knowing but not really understanding how difficult it was to see your comrades fall and to come home from this terrible war and try put a life together. Because of his PTSD and other issues he was unable to be the person and father that he could have been.

It has been 75 years since the end of world two. So what am I supposed to feel? It has been some time now. What are the millennial supposed to feel? What is the purpose of these memorials? Was the war justified? So many lives lost. So many lives disturbed. I studied and read about the many wars in the past which were about power struggles of the elite. Wars were romanticized to recruit fighting men. I think that even my father was affected by this but this was justified because Nazism as we know it, truly was terrible.

These memorials today should be reminders of how devastating wars really are not only to the fighting men but also about their families and the societies. To remind us to try to find nonviolent solutions to our disagreements. We need to question our leaders as we are all affected by these wars.

So was I to feel pride? But it was my father who did the fighting. How could I feel pride for what he had done? I shared this with a colleague and he help me to see that it was okay to have pride. Pride in knowing that I was the son of a man who had the courage and fortitude to fight in and to survive this terrible war.

Now with the pandemic, maybe we are starting to have a taste of what these people went through. They went through fear and uncertainty and suffering for five years. We have had it very good and not really knowing it. Some of us now are beginning to appreciate what we have or what we had. Maybe developing gratitude.

Yes, I realized that what was more important was gratitude! Gratitude to my father and other people like him who volunteer their time and often their lives to make this a better world. They helped to preserve and save the world from those who choose to abuse this wonderful world we live in. To counteract those destructive forces and to provide balance.