Home Weather International Weather Why tornadoes are so difficult to predict 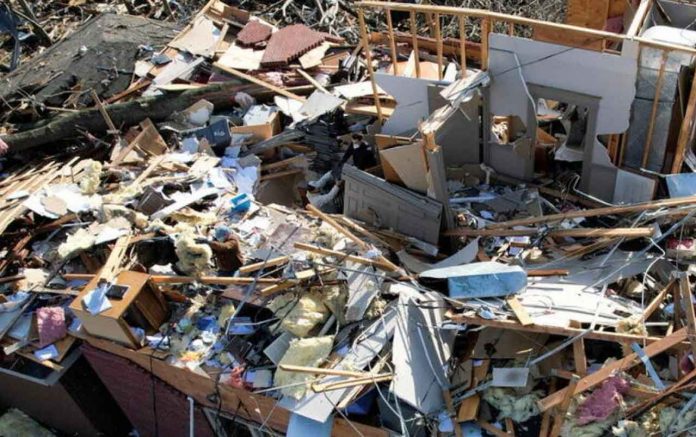 Scientists can usually predict a hurricane’s path three to five days in advance, while tornadoes usually form in a span of a few minutes

(Reuters) – After a string of powerful tornados struck the U.S. Midwest and killed more than 100 people this weekend, attention has turned to the warning systems in place and why the movements of the fast-moving storms are so difficult to predict.

A tornado is a narrow, violently rotating column of air that extends from a thunderstorm to the ground, according to the National Oceanic and Atmospheric Administration. About 1,200 tornadoes hit the United States yearly.

Unlike hurricanes which can be seen gathering strength days in advance, a tornado watch lasts for four to six hours over a certain area when favorable conditions develop for tornadoes.

Hurricanes usually have diameters measured in hundreds of miles and can last for days or weeks. Scientists can usually predict a hurricane’s path three to five days in advance. Tornadoes usually form in a span of a few minutes, are normally a few hundred feet wide, and last for a few minutes.

Tornado watches, which are not the same as tornado warnings, are typically issued hours in advance by meteorologists watching the weather 24/7 across the United States and cover parts of a state or several states. They indicate that weather conditions are ideal for a tornado to form, but do not necessarily result in a tornado.

Meteorologists in local offices of the National Weather Service issue a tornado warning when a tornado is either reported by spotters or indicated by radar https://www.weather.gov/safety/tornado-ww and there is a serious threat to lives and properties in its path. The average lead time for tornado warnings is eight to 18 minutes, according to Weather.com.

Many towns use public warning sirens to warn of tornadoes, but rural areas and smaller towns do not have them. Most local radio and television stations broadcast the warnings, as do many smart phone apps and the Wireless Emergency Alerts provided by FEMA that come from cell towers in the vicinity of tornadoes and flash floods.

The genesis of the tornado outbreak over the weekend was a series of overnight thunderstorms, including a super cell storm that formed in northeast Arkansas. That storm moved from Arkansas and Missouri and into Tennessee and Kentucky.

This time was deadlier because the tornados hit at night.

“People rely on a visual confirmation to go into shelter. But at night, you know, you don’t have that,” said Jeff Masters, a meteorologist for Yale Climate Connections.

Masters added that the mile-wide size of the biggest cell was another factor for the widespread destruction. “That means there’s really no place to hide. It’s so large and so powerful that even if you’re in shelter, you’re at danger of losing your life.”

(Reporting by Ahmed Aboulenein and Chris Sanders in Washington; Editing by Lisa Shumaker)