Home Weather Climate News A Firefighter confronts Siberia’s wildfires: ‘We had to surrender’ 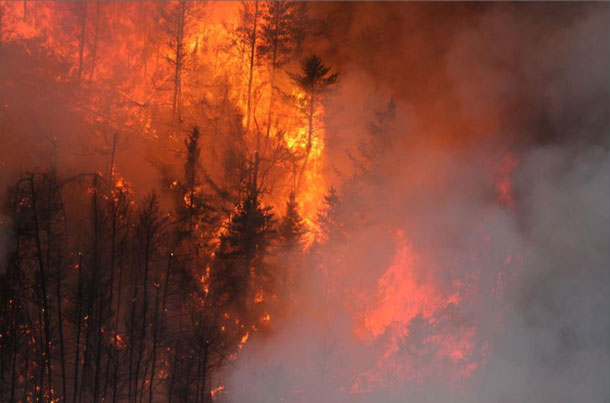 For the first time in 23 years, Grigory Kuksin’s firefighting operation must allow blazes in Russia to engulf entire forests

PETERSBURG, Russia – (Thomson Reuters Foundation) – After fighting wildfires for 23 years, Grigory Kuksin never expected to stand back and allow one to burn.

“We have had to just step back and surrender, sacrificing large areas to the fires,” he said.

Russia is fighting more than 296 forest fires that have closed roads and airports, triggered evacuations and sent plumes of smoke across the North Pole.

The infernos in Siberia alone are larger than all the other fires around the world.

Siberia is an area so vast that big fires can be left to burn without threatening major settlements or infrastructure.

But abandoning dozens of fires covering thousands of miles with no effort to fight them is shocking for Kuksin, a man used to risking his life to save even a square metre of forest.

“There are more fires every year and this year is so extraordinary. We have never seen this before in Russia. This is certainly connected with climate change,” he said.

Part of a special force assembled to put out fires in nature reserves, Kuksin has criss-crossed the nation this summer to support local firefighters with equipment and know-how.

He is still coming to terms with what he has seen.

In Karelia, a western region close to neighbouring Finland known for its lakes and heavy rainfall during summer, he saw rare peat fires.

“For the first time in my life I saw humid wetlands on fire. It seemed impossible.”

Russian meteorologists say temperatures recorded in June and July were 3.9 degrees Celsius higher than the average of the past 20 years resulting in dozens of wildfires, with some breaking out on islands in one of Europe’s largest lakes.

Kuksin, who teaches sports to children with special needs in his spare time, goes for weeks at a time without seeing his wife and son who live on the outskirts of Moscow.

“My work takes a lot of my time away from my family. We are trying to cope with it. My family has never tried talking me out of doing what I do,” he said.

A near escape while battling a forest fire in the Siberian region of Khakassia this summer was a reminder of the perils of the job.

Deep in a forest encircled by an inferno of burning trees, Kuksin and his colleagues had to hose each other down to prevent their uniforms from catching alight as they ran through flames to safety.

“There are dangerous moments in every fire. Fighting fires is not about heroism or getting emotional reactions or adrenalin, it is about clear rules and regulations,” said Kuksin.

Other risks include burning pine trees which can topple in an instant.

“Even when you take a minute’s break and sip your water you should always look at the trees. It is tiring and exhausting always looking up at burning trees but you should never look away,” he said.

Kuksin sees no let-up in Russia’s fires unless swift action is taken to combat climate change and to educate Russians about the causes of fires.

“We see how the fire season is getting longer as we witness more extreme heat waves and droughts. This is why there are no climate-sceptics among us firefighters,” he laughs.

“Unfortunately, this is a new reality for us and we need to look for new solutions. From the ways we redirect water to educational and public awareness campaigns.”