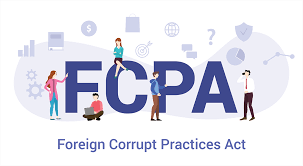 Bribe money does not necessarily have to change hands for one to be in breach of FCPA laws. The anti-bribery provisions enshrined in the FCPA can apply to a broad array of entities and private individuals including US-based companies and their officials as well as stakeholders such as employees and agents (including third-party representatives, consultants, and others), American nationals and citizens, foreign corporations that trade stocks and securities in the US, and many others. Individuals and entities who are not explicitly mentioned in the FCPA can still be charged under this law if they or their legal representative engage in acts that facilitate the payment of a bribe. For example, if the citizen of a foreign nation travels to the US with a view of arranging for a bribe to be paid to an official in their government back home, then the foreign national in question can be prosecuted under the FCPA. Find solid info here.

However, there are certain types of payments that can be made within the legal limits of the FCPA. They include:

The FCPA also lays down stringent accounting regulations that must be adhered to by publicly traded firms in the US. These regulations are in place to ensure that company directors do not use creative accounting schemes to hide unlawful payments and bribes. Additionally, these regulations also help the stakeholders of a company and the SEC to gain a clear and accurate understanding on the nature of the company’s finances.

Penalties for flouting FCPA laws tend to be significantly hefty. This is because most of the contracts that involve payment of bribes tend to involve significant amounts of money and in most cases, the contracts in question are usually under investigation by the SEC and DOJ.

Key Rulings in Cases Where FCPA Laws Were Flouted

In 2019, both the SEC and the DOJ slapped Ericsson – a global Telco – with fines of more than $1 billion so that the firm could settle charges that it orchestrated a massive bribery scheme where fake business consultants bribed various government officials in foreign nations.

In 2018, Petróleo Brasileiro S.A. – a Brazilian energy firm – agreed to remit a fine of $1.78 billion so as to settle an extensive bid-rigging and bribery case that involved the payment of bribes to political parties and politicians.

In 2008, engineering behemoth Siemens AG paid $800 million so as to settle charges that the company has spent almost $1.4 billion in bribes to officials in foreign governments. In addition to the $800 million that the company paid in the US, it also forked up $856 million to settle similar charges of bribery in Germany. The total fines levied against Siemens totaled to $1.6 billion.