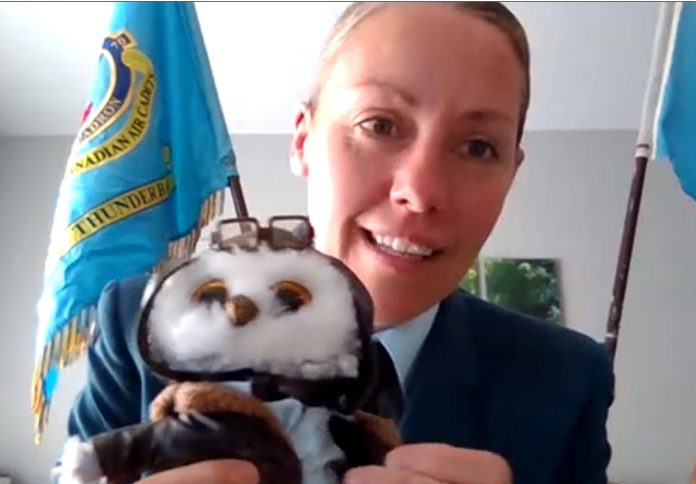 Thunder Bay — An unusual training year for Thunder Bay’s Air Cadets ended in an unusual way. The usual pomp and spit and polish requisite of an Annual Ceremonial Review (ACR) was replaced on 8 June 2021 by a virtual celebration of all of the training and experiences gained by the cadets over the course of a year that saw training shift largely to an online format.

The squadron — soon to be renamed after aviation pioneer Elsie MacGill — was reviewed by Mr. Rohan Soulsby, MacGill’s grandson, live from his home in British Columbia. The cadet program, and the pending redesignation as 70 Elsie MacGill Squadron, is a fitting tribute to MacGill, said Soulsby in his address to the cadets: “The alignment between [Elsie MacGill’s] advocacy for youth, her interest in aviation and in Thunder Bay as a location are perfect for having the squadron named in her honour.”

Over the course of online training necessitated by public health orders, 70 Squadron has maintained engaging and dynamic programming. The squadron hosted a virtual regionally directed activity for Sea, Army and Air Cadets across northern Ontario and beyond: cadets and staff led various engaging and interactive activities using space exploration as a unifying theme.

Several cadets undertook training to become cadet correspondents and have created various mixed media to advertise, share and celebrate our successes and achievements.

In order to make the most of our time in lockdown, the Squadron developed and implemented training to prepare cadets to qualify for Transport Canada’s drone pilot license and/or aviation radio operator certificate.

Reflecting on the year, Soulsby wished cadets and staff “Every success with 70 ‘Elsie MacGill’ Squadron… and the air cadet program in general, and I encourage all you cadets to continue in the program and to keep the valuable lessons that the cadet program teaches.”

While the ACR marks the end of the training year for some cadets, others will continue their cadet experience during virtual summer training opportunities as well as this summer’s in-person sessions of the Cadet Activity Program (CAP) taking place in Thunder Bay.

Currently enrolled cadets, as well as any youth aged 12-14 who join a cadet unit prior to the end of August, will be able to take part in a week-long series of exciting activities — including hiking, marksmanship, mountain biking, STEM activities, socially-distanced sports, tours and more. All of these activities are free, and all are designed to help to meet the goals of the cadet program to develop attributes of good citizenship and leadership, promote physical fitness and stimulate an interest in the sea, army and air activities of the Canadian Armed Forces.

What will happen to girls’ education in Afghanistan under Taliban rule?