Home Business Yuliana Grasman Proves What Men Can Do, Women Can Do Better in...

Emerging as one of the most popular faces of the world of car racing, Yuliana Grasman who is also known as “Afra” proves women can also excel in the thrilling sport of car racing besides their male counterparts.

Here, “Afra” acts as a role model for hundreds of other women who aim to take up car racing as their active sport career. She has proved in the car racing world male may have been ruling for decades together but women racers can equally pose challenges to them performing very good, if not better.

Based in Dubai, “Afra” always wanted to be a successful car racer but her family did not encourage her as they considered it to be something where male should go. But she resisted them to become the most popular face of car racing bringing glory to her family.

Popularly known as 4×4 Drift Queen of the World, “Afra” is a multi-faceted personality as she is also a filmmaker producing different short films and music videos. Besides, she also carved out her own place in the world of glamour as a model. 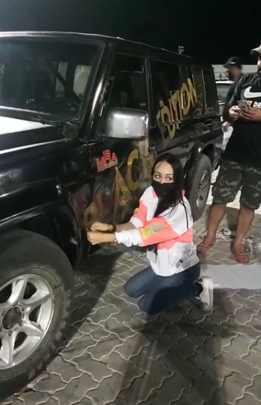 “Afra” also became a known name in the film world after she featured in some movies with the Bollywood superstars like Shahrukh Khan and Salman Khan. She also has a poet within her. She has to her credit a number of poems which she dedicated to her car and racing sport.

Currently, “Afra” is busy writing a motivational book and also has grand plans to write an autobiography. She feels this can inspire other women to come forward and participate in car racing.

“Afra” participated in car racing competitions and succeeded in winning several of them. They included, among others, Time Attacks, Rally Samuryk, Ice Competitions, Rally 24 hours, UAQ and In Umm AL.

Besides, “Afra” also won the first woman to drift with 4 x 4 in freestyle competition. Here, it may be mentioned that the Nissan Patrol model helped her play the most dominant role in the racing world that also made her known as the Nissan Patrol Queen.

It is very interesting to know that “Afra” practically threw the Nissan car on the global stage of car racing after she became the only woman to win the championship and the only competitor that has made use of the 4×4 in the competition.

A risk taker and daring, “Afra” had an accident in the middle of a competition that forced her to leave it and go for long treatment for the injuries she suffered. The white Nissan that she was racing also was damaged in that historic accident.

Her second car, the Black Edition was also involved in a major accident which was taken by a person without her consent and practically by force. That person left her with injuries. The car was canceled. Despite all these, she returned to car racing and earned her title of Freestyle drift champion.

“Afra” is a role model in adventure sports to a large number of women who idolize her for breaking the dominance of male in car racing. Such women now want to emulate her to become car racers themselves.

“Afra” now runs a global community named as the Black Edition Empire Royal Club. It is named after her car. All those who are lovers of car racing can join it.