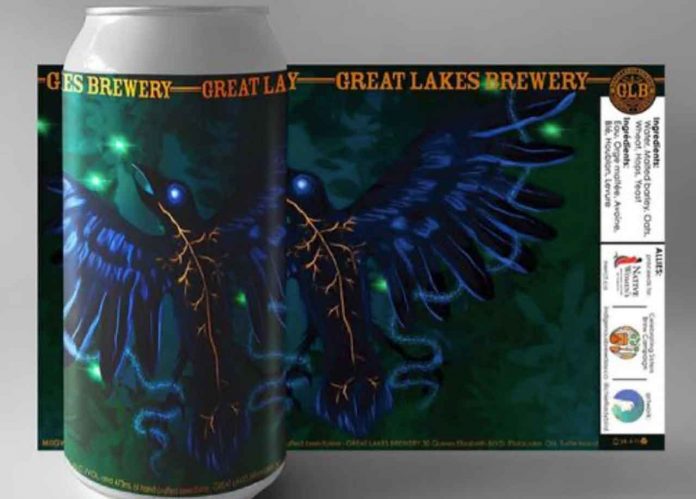 The design (beautiful, by the way) is part of the brewery’s participation in the Celebrating Sisters Brew Campaign, an initiative by 43 Canadian beer companies that donates proceeds from alcohol sales to Indigenous women’s organizations and is organized by a trio of Indigenous brewers called the Indigenous Brew Crew (IBC).

Originally titled “the Red Beer Project” (referring to Métis artist Jaimie Black’s well-known Red Dress art installation that honours murdered and missing Indigenous women), the IBC explains on their website the Celebrating Sisters Brew Campaign is an attempt to “raise awareness about Missing and Murdered Indigenous Women in Canada” and “celebrate the strength and power of Indigenous Women.”

It’s one of a series of “Indigenous Brew Days” organized by the IBC, events which, according to co-founder Mark Solomon, attempt to address “the complexities with Indigenous peoples and alcohol… within the Indigenous community and external perceptions around us.” Solomon is a member of Henvey Inlet First Nation.

To call Indigenous relationships with alcohol “complex” is an understatement.

There is much alcoholism in my family’s background. Many of my living relations still struggle with devastating relationships with booze. I’ve struggled with alcohol too.

In fact, I don’t know anyone in the Indigenous community who wouldn’t echo one of the above statements.

Alcohol has always existed in Indigenous communities — many used forms of it in ceremonies and medicines — but it’s been used a great deal over the past few centuries to cope with trauma.

As land theft, violence and laws strangled our communities, removed our children and treated us like wild animals, alcohol use increased. Simply put: it provided an escape.

Alcohol has also been used as a weapon. Government agents used it to manipulate Indigenous leaders during treaty time. Traders used it to undermine traditional economies. The Indian Act even banned Indians from drinking in “pool halls” until after the Second World War.

Many Indigenous peoples have formed healthy relationships with alcohol of course, but it’s fair to say alcohol continues to be a primary facilitator of much violence in our communities. Of many dysfunctional relationships. Of a great deal of pain, suffering, and death.

This is why an event like Indigenous Brew Day is very, very complicated.

It also brings up many stereotypes of Indigenous peoples, invented to justify violence by journalists, writers and politicians.

The key is to remember alcohol isn’t the problem though; Canada’s violence is. The overuse of alcohol is basically medication for the historical and present trauma of being an Indigenous person in Canada.

For those who say abstinence is the answer, you don’t understand the reality of Indigenous life.

If the trauma of society’s racism, violence, and abuse against Indigenous peoples remains, so will the reasons to escape.

Quitting is one step, but finding a way to cope with Canada’s violence will still be necessary. This is why traditional ceremonies, languages and cultural ways are so important.

This is also why talking about alcohol is so important. The outcomes of trauma are violence and silence — the two things which lead to more dysfunction (and, not coincidentally, addiction).

These conversations aren’t easy. So, without surprise, this week’s announcement of the Celebrating Sisters Brew Campaign brought up many reactions on social media.

“Alcohol has never brought anything good with it when it comes to Indigenous People,” tweeted an Algonquin woman.

Negative reactions increased when the Great Lakes Brewery shared images of Indigenous peoples smudging their brewery and alcohol tanks (something they claim their Indigenous partners asked to do).

“I cannot think of any circumstance where it would be appropriate to smudge alcohol and take pictures of it,” tweeted a woman from Beausoleil First Nation.

The brewery has since erased the photos.

The reaction to Chief Lady Bird’s designs was the most interesting though.

While some condemned her, a huge group of Indigenous peoples commended and encouraged her. Some even promised to buy the beer and pointed out Indigenous art has appeared on wine and alcohol elsewhere — but had been created by men, so her art was essentially proving the point of the campaign.

The best reaction though was by Chief Lady Bird. In a lengthy post, she wrote: “There has been a lot of amazing dialogue about what it means to have an Indigenous person’s art on a beer can… I’m grateful for the time & care folks are putting into their thoughts about how colonialism and intergenerational trauma play a role in our relationships to alcohol.”

That is the sound of the end of silence.

Originally appeared in the Winnipeg Free Press in April 2021. Republished with the permission of the author.

Stolen identities: What does it mean to be Indigenous? Don’t Call Me Resilient Podcast EP 8 Transcript